MALE, Maldives — Police in the Maldives said Friday an explosion that wounded former President Mohamed Nasheed and four others including a British national was an act of terrorism and they are attempting to identify four possible suspects.
May 7, 2021 2:13 PM By: Canadian Press 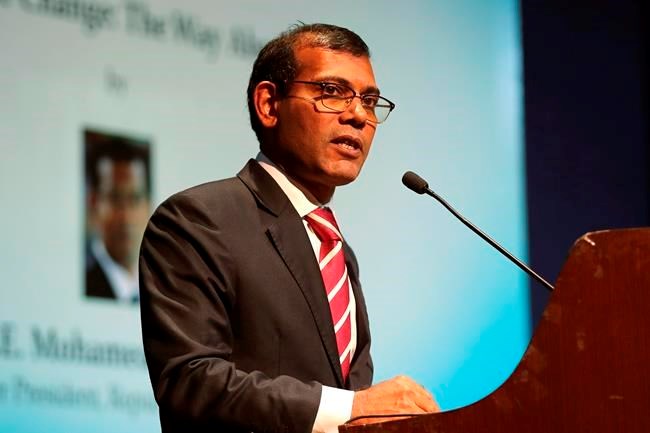 MALE, Maldives — Police in the Maldives said Friday an explosion that wounded former President Mohamed Nasheed and four others including a British national was an act of terrorism and they are attempting to identify four possible suspects. Australian police said they are ready to assist the investigation.

Nasheed, 53, was wounded in the blast outside his home Thursday night as he was about to get into his car, police said. He was in critical condition in an intensive care unit after life-saving surgeries to his head, chest, abdomen and limbs, ADK Hospital said in a statement Friday evening.

Chief of Force Abdulla Shamal said a homemade explosive device fixed to a motorbike which was parked near Nasheed's car was detonated possibly with the use of a remote controller, as he was about to leave home for an event.

He said the explosive device contained ball bearings with the aim of causing bigger damage.

Nasheed has been an outspoken critic of religious extremism in the predominantly Sunni Muslim nation, where preaching and practicing other faiths are banned by law.

Police Commissioner Mohamed Hameed said police are treating the blast as an act of terrorism against the former president. Two of Nasheed's bodyguards and two apparent bystanders, including a British citizen, were also wounded, he said.

Police have not detected any military-grade components in the explosives used, Hameed said. They are trying to identify four possible suspects but no arrests have been made, he said.

No one has claimed responsibility for the blast. Photos circulated on social media showed a ripped-up motorcycle at the scene.

Nasheed is the current Parliament speaker and was the first democratically elected president of the Indian Ocean archipelago, serving from 2008 to 2012.

Current President Ibrahim Mohamed Solih said in a televised speech that Australian Federal Police investigators will arrive Saturday. The Australian police force said it will assess what assistance they can provide the investigation.

The Maldives is known for its luxury resorts but has experienced occasional violent attacks. In 2007, a blast in a park in the capital wounded 12 foreign tourists.

Violence has been blamed on a rise in religious extremism. The Maldives has one of the highest per capita numbers of militants who fought in Syria and Iraq alongside the Islamic State group.

Maldives authorities announced in January that eight people arrested in November were found to have been planning to attack a school and were in the process of building bombs in a boat at sea. Police said they also conducted military training on uninhabited islands and recruited children.

Hameed said it was not known whether the attack on Nasheed was linked to that group.

Nasheed's presidency ended 30 years of autocratic rule, but his own term was cut short when he resigned amid protests. He was defeated in the subsequent presidential election and was convicted of terrorism under his predecessor for having arrested a top judge while president, and was sentenced to 13 years in prison.

He was allowed to go to Britain for medical treatment and received asylum there in 2016. His party colleague, Solih, won the 2018 presidential election and Nasheed was able to return home.

Nasheed has remained an influential figure and was elected Parliament speaker in 2019. He has championed global efforts to fight climate change, particularly rising seas threatening the low-lying islands of his archipelago nation.

India’s external affairs minister, S. Jaishankar, in a tweet described the blast as an attack on Nasheed.

“Wish him a speedy recovery. Know that he will never be intimidated,” Jaishankar said.