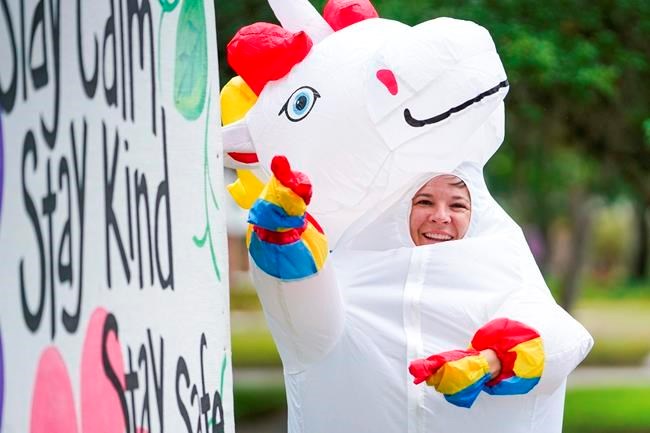 TAMPA, Fla. — More than a week after Easter, there's still one mythical creature hopping around a Florida trying to spread happiness.

Corey Jurgensen, 40, donned a 7-foot (2-meter) -tall inflatable unicorn costume to jog, jump and dance around the streets near her Tampa home last week in an effort to cheer up stuck indoors amid the coronavirus pandemic, The Tampa Bay Times reported.

Jurgensen originally purchased the inflatable for Halloween, but gave it a new life on March 21 when a friend from Washington saw a similar act on social media and challenged Jurgensen to suit up and show hers off.

Since then, Jurgensen told the newspaper she has galloped around streets within a mile () radius of her home multiple times — drawing honks from passing cars, claps from families standing on porches and many, many photos posted to social media.

Though the massage therapist has not been able to work her regular job in weeks, she said her new calling is providing a temporary distraction.

“There is nothing better than being a unicorn,” Jurgensen told the Tampa Bay Times. “Everyone smiles when they see a unicorn.”