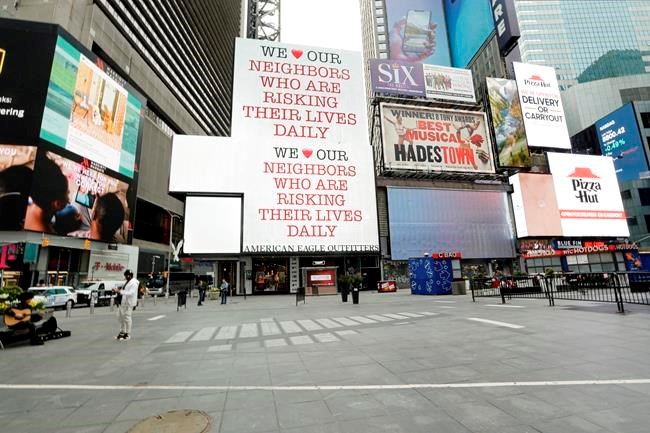 The dust-up started during the Democratic governor's daily briefing, when he said the federal government was doing too little to help states reopen their outbreak-stricken economies by making sure they can perform mass diagnostic testing.

“The federal government cannot wipe its hands of this and say, ‘Oh, the states are responsible for testing.’ We cannot do it. We cannot do it without federal help,” he said.

Within a half-hour, Trump was tweeting about it.

“Governor Cuomo should spend more time “doing” and less time “complaining”. Get out there and get the job done. Stop talking!” Trump tweeted.

The Republican president said the federal government came through on ventilators and thousands of hospital beds for New York, yet Cuomo seemed ungrateful.

Cuomo and Trump have clashed intermittently over the federal response to the outbreak. But Friday’s flare-up was unusual for playing out during the course of one of Cuomo’s widely watched briefings. A reporter read Trump’s tweets to Cuomo, and the governor responded with his own barbs.

“How many times do you want me to say thank you?” Cuomo asked. “I’m saying thank you for doing your job.”

While he lobbies for federal help, Cuomo said, he will order the 300 labs and hospitals licensed to perform virus testing in New York to and prioritize diagnostic testing.

Separately, New York City Mayor Bill de Blasio announced five new walk-in testing sites will be open by Monday, with a focus on residents ages 65 and older in areas with high numbers of cases of the COVID-19 virus. The sites will initially offer a total of 2,400 tests a week, but the city aims to double that quickly.

“Everyone’s important,” the Democratic mayor said, but “this is about sharp, clear disparities.”

Five other new testing sites will be available to health care workers who are members of a major union that represents nurses, aides and many others. Those sites, offering a total of 3,500 tests per week, also will be open to other essential workers, including those who work at adult care facilities, and to city residents 65 and older with underlying medical conditions.

Other coronavirus developments in New York:

The number of total hospitalizations statewide is dropping slowly, with over 17,300 on Thursday. However, almost 2,000 people a day with COVID-19 are still entering the hospitals.

There were 630 deaths reported Thursday, bringing total number of confirmed deaths since the outbreak close to 13,000. The daily death toll has not dropped below 600 since April 5.

New rules requiring New Yorkers to cover their faces in public are going into effect Friday as the state's residents prepared for at least another month of social distancing to curb the spread of the coronavirus.

Under the guidelines announced this week by Gov. Andrew Cuomo, everyone must wear a mask or face covering when in a public place and unable to maintain appropriate distance from others. Children younger than 2 and people with a medical reason why they can't tolerate a mask are exempt from the rule, which takes effect at 8 p.m.

Cuomo announced Thursday that the state's stay-at-home restrictions that have been in place since March 22 will last at least until May 15. He said the extension was made in consultation with officials from other Northeast states and will be reevaluated next month.