Body of fourth tuber has been found in North Carolina river

EDEN, N.C. (AP) — The body of a fourth tuber has been found in a North Carolina river following a deadly accident in which a family on a recreational float went over a dam, local officials said Sunday.
Jun 20, 2021 2:55 PM By: Canadian Press 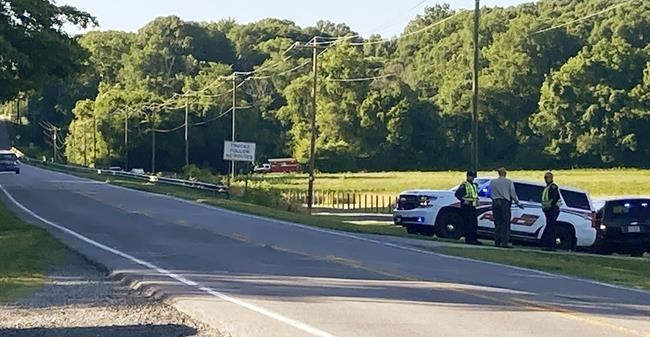 EDEN, N.C. (AP) — The body of a fourth tuber has been found in a North Carolina river following a deadly accident in which a family on a recreational float went over a dam, local officials said Sunday.

The Rockingham County Sheriff’s Office said in a news release that authorities received a 911 call about 10 a.m. reporting a body in the Dan River near a boat landing in the town of Eden.

The sheriff’s office said crews have begun efforts to recover the body. The victim’s identity is yet to be confirmed. Two tubers had been missing. One was a 7-year-old boy. The other was a 35-year-old woman.

“Following the recovery this morning, two water craft are again searching the river from the dam back to the (boat landing) for the final victim,” the sheriff's office said Sunday.

A group of nine people were floating down the river on inflatable tubes when they went over a dam. Four people were rescued Thursday, while three tubers’ bodies were found that day.

The group went over a dam that’s about 8 feet (2.5 meters) high next to a Duke Energy plant. Boating experts told The News & Record that such low-head dams are notorious for trapping people in the powerful current that churns at their base.

Dan Riverkeeper Steven Pulliam of Stoneville told The News & Record in Greenville that he wonders if recent rains created mud that obscured a portage area where boaters and tubers can exit and walk around the dam’s powerful currents.

“We continue to stand firmly behind the decision made yesterday to suspend search efforts until we had new leads upon which to search,” the sheriff's office said in its news release. “At no point have we, or will we, cease our recovery operations.”

The sheriff's office had identified the two missing tubers as Teresa Villano, 35, and Isiah Crawford, 7, both from Eden.

The office identified the victims who were found Thursday as Bridish Crawford, 27, and Antonio Ramon, 30, of Eden; and Sophie Wilson, 14, also of LaPorte, Indiana.

Karlos Villano, of LaPorte, Indiana, was also rescued. A news release from the sheriff’s office didn’t indicate how Karlos Villano was related to the others, except to say he was a visiting relative.