Amid virus gloom, glimpses of human decency and good works 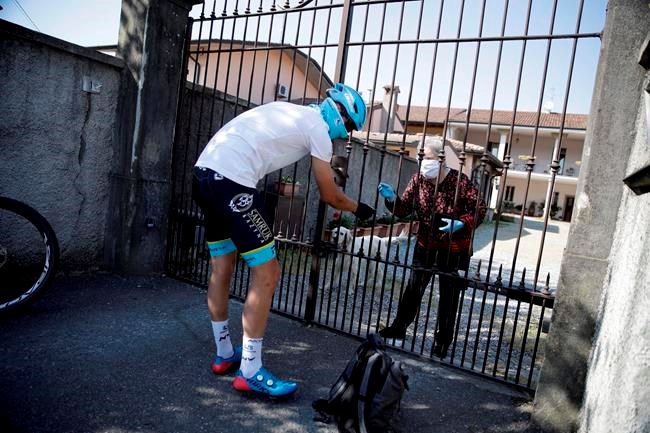 NEW YORK — The idea formed on a day when all the news headlines were dire. The coronavirus was surging worldwide; Nashville had lost lives in a devastating tornado and children had their lives upended as they separated from beloved classmates to shelter at home.

But only bad news is never the whole story. Days later, The Associated Press started its daily series “One Good Thing” to reflect the unheralded sacrifices made to benefit others that normally wouldn’t make a story, but maybe always deserved one.

Since March 17, when a Norwegian mom tried to soften the blow of birthdays under quarantine for her two teens by asking via social media that people reach out to them, there have been 35 stories about the ways that everyday people have tried to make a positive difference in the lives of others. The gestures have been grand and small, some as simple as chalk-written messages on a sidewalk thanking healthcare workers at a New Orleans hospital for their efforts.

Music has been a central theme. The series has included stories about a Rio firefighter sharing his love of music from a hydraulic ladder 150 feet up as he played the trumpet for cooped-up apartment dwellers; a virtual rendition of “Bolero” from the National Orchestra of France, with each musician playing alone at home; the virtual Corona Community Choir with members around the world, performing on Sundays.

If music soothes the soul, food feeds it. There have been six stories that tell of benefactors feeding health care workers, the poor, the elderly shut ins, even volunteers feeding hungry animals at a revered Hindu temple in Kathmandu, Nepal.

There have been meals from Brooklyn caterer Israel Frischman for Holocaust survivors who are shut in. The day after the story ran, donations poured in and now Frischman has financial backing for the needed meals. And simpler fare from the “Solidarity Menu” started by Emiliano Moscoso, who employed his hamburger chain of restaurants in Colombia to feed poor in Bogota.

The delivery of lifesaving supplies has been a storyline as well, from the professional cyclist in Italy who has gone from racing against competitors to racing medicine to those in need, to Yale student Liam Elkind’s delivery service. A month after reporting on Elkind’s “Invisible Hands” effort which he started with a friend, he reports that it’s ballooned. “We’re making over 1,000 deliveries a week now, and over 10,000 volunteers have joined our group. I feel like I haven’t slept in decades, but, honestly, I’ve never felt more energized,” he said.

Heroes have emerged in youth, from Nova Knight, a 5-year-old firecracker in Alaska imploring her cohorts to wash their hands and postpone playdates, to 16-year-old TJ Kim, who can’t drive, but can fly. He uses those skills to deliver much-needed medical supplies across rural Virginia.

The stories have circled the world, from Colombia and Nepal, to Italy, Germany, France, Spain, Brazil, Israel, Indonesia and South Korea where Kim Byung-rok, a shoe cobbler, donated land to help raise money for the fight against the virus.

In the month of stories about the goodness of others, it’s no surprise when we doubled back to the previous subjects of the coverage, AP journalists found the obvious: the givers’ giving has expanded.

Associated Press religion coverage receives support from the Lilly Endowment through the Religion News Foundation. The AP is solely responsible for this content.