LOS ANGELES — When it’s time to release one of his maximalist albums, DJ Khaled turns a moment into an event. He posts Instagram videos showing recording sessions, silly dances and praise from the hip-hop and R&B heavyweights who worked with him.
May 7, 2021 1:19 PM By: Canadian Press 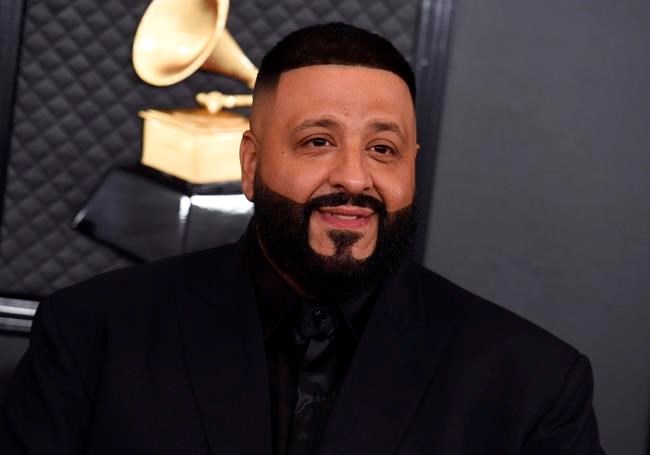 LOS ANGELES — When it’s time to release one of his maximalist albums, DJ Khaled turns a moment into an event. He posts Instagram videos showing recording sessions, silly dances and praise from the hip-hop and R&B heavyweights who worked with him. The lavish, exuberant productions are meant to soundtrack loose gatherings at popped fire hydrants, sunny barbecues, resort pool parties.

“It’s a tradition. Any time Khaled drop anything, summer starts. I could drop a record in winter and summer starts. That’s just who I am,” the 45-year-old producer, DJ and social media star said from his Miami home this week.

The pandemic summer of 2020, though, most certainly did not match his triumphalist, ever-positive image. The songs were mostly ready. But after announcing his 12th album “Khaled Khaled” and releasing two lead singles featuring Drake in July, he pulled back.

Khaled took time out to focus on his two young sons, Asahd (now 4) and Aalam (now 1).

“When I started seeing the new world and the pandemic and all this stuff, you only seen this in movies and you only heard about things like this in the scriptures,” he said. “And for it to really start happening, I wasn’t even worried about me. I just kept thinking about my boys.

“My job was to keep them in the light and keep them smiling and happy. So while I was doing that, I was just praying to God saying, God, please give me this energy. I need more energy right now. I need it and I won’t be selfish with it, and I want to put it out to the world.”

The album is now out in the world. Its title is his given name and its cover shows him in prayer on a rug alongside his sons. A total of 29 rappers and singers are heard across 13 tracks, including pop music’s two biggest Justins, Timberlake and Bieber, on separate songs, plus a pairing of superstar rappers and former rivals Nas and Jay-Z. He released six music videos already, with more on the way.

“When it’s dark times, we have to be the light. So in a physical form, be the light. If it’s through music, be the light,” he said. "So now it’s time for a light show because the album is out, and Khaled bringing the light.”

Many of the beats and melodies strike familiar notes to listeners of a certain age, utilizing samples that were first flipped well over a decade ago on Jay-Z’s “Song Cry," Notorious B.I.G.’s “Long Kiss Goodnight,” Shorty Lo’s “Dey Know” and Mary J. Blige’s “All That I Got Is You.”

“I love sampling. I think it’s beautiful,” Khaled said. Album opener “Thankful” features an interpolation of Bobby Bland's 1974 tune “Ain't No Love in the Heart of The City," used by Kanye West for Jay-Z's “Heart of the City (Ain’t No Love)."

“We praise the sample, but we also bless the sample. Lil Wayne and Jeremih, they’re pouring our hearts out. I’m pouring my heart out," Khaled said. “So we’re making records that are praising what we’ve been inspired by."

Khaled, who is uniquely positioned as an ever-supportive “hype man” to unite hip-hop's older generation with its teen and 20-something rising stars, hopes that as those re-upped melodies evoke nostalgia for him and others, they bring fresh joy to young people: "I can imagine the youth, the first time hearing that ... The new generation get to feel what I felt when I first heard that sample.”