Voodoos start quick as they power past the Rapids 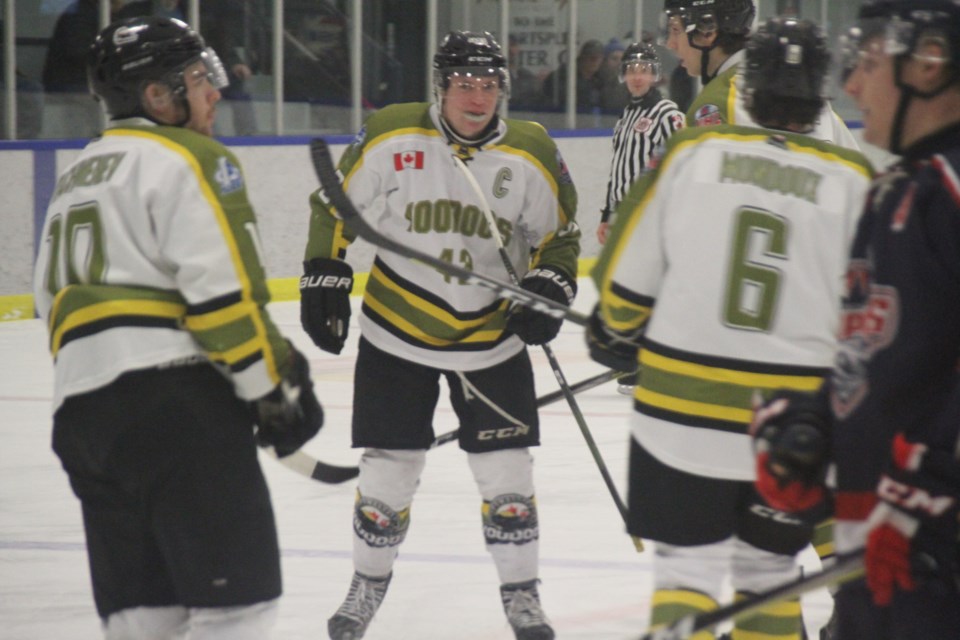 Voodoos Parker Bowman celebrates his second goal of the game in the second period. Photo by Chris Dawson/BayToday.

The Powassan Voodoos connected for five first period goals and never looked back at they went on to defeat the French River Rapids 7-1 in Northern Ontario Junior Hockey League play Wednesday at the Powassan Sportsplex.

It took the hometown Voodoos just 22 seconds to open the night’s scoring as Ryan Mills connected on the first shift of the game.

It was more Powassan at 4:49 with Sam Ellwood adding to the early lead.

They then went up by three midway through the initial period on a Gregory Trudeau-Paquet marker which was the 100th goal of his NOJHL career.

Continuing to click offensively, Parker Bowman finished one off via the power play at 12:02 to keep the hosts rolling before affiliate Cameron Lemcke added one at even strength 55 seconds later to cap off the offensive outburst in the session.

It was more from the hosts in the middle stanza as they tacked on two more to extend their lead.

Bowman bagged his second of the night and 36th of the season at 11:31 before Mills managed another late in the period to put Powassan up by seven.

French River did dash the shutout bid of the Voodoos Owen Say at 3:21 as Levi Siau finished off the work of teammates Ty Chambers and Jack Ginocchi to round out the night’s scoring.

Bowman led the way offensively with a four-point performance while Mills, Trudeau-Pauet and Tomas Yachmenev, who dished out a trio of assists, each had three points.

Say finished with 38 saves to record his league-leading 27th victory of the season in the Voodoos’ triumph as they raised their NOJHL-best winning percentage to .823 in 2019-20.

Rapids starter Sebastian Woods faced allowed five against on 24 attempts in defeat during two periods of work while backup Ben Montgomery handled nine of 11 in relief for French River.

The win moves the Voodoos within one point of the Timmins Rock for first overall in the NOJHL standings. The Voodoos, who have two games in hand on the Rock, will host their Timmins rivals on Friday night at the Powassan Sportsplex

Mondoux leads Voodoos to OT win over Rock
Feb 21, 2020 10:49 PM
Comments
We welcome your feedback and encourage you to share your thoughts on this story. We ask that you be respectful of others and their points of view, refrain from personal attacks and stay on topic. To learn about our commenting policies and how we moderate, please read our Community Guidelines.