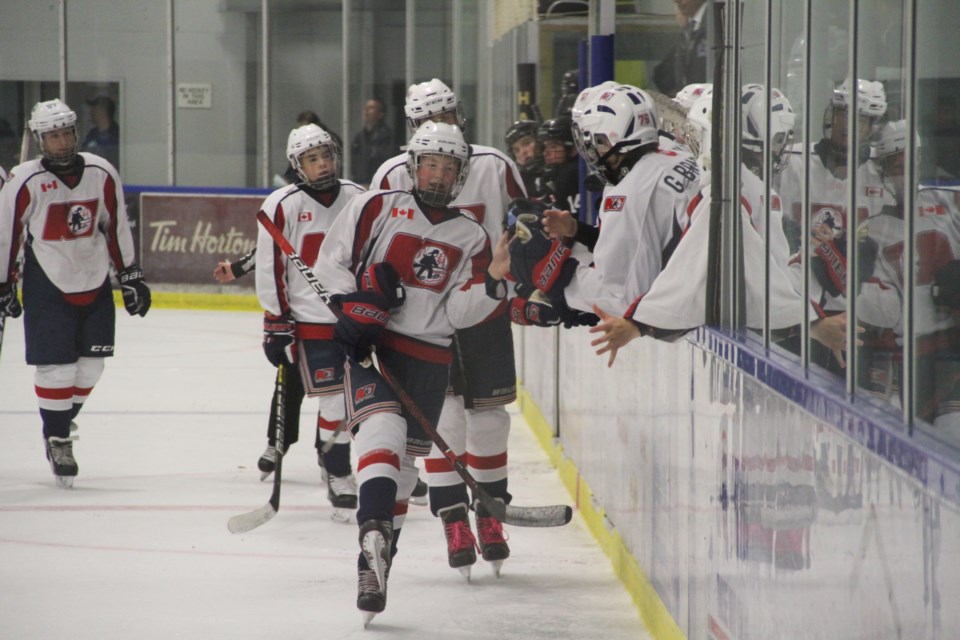 Nate Gravelle celebrates on of his three goals Sunday for the minor bantam AAA Trappers. Photo by Chris Dawson/BayToday.

The North Bay & District Major Bantam AAA Trappers dropped a pair of games to the Nickel City Sons over the weekend.

On Saturday, the Trappers fell 5-3 to the Sons.

Kaedyn Long, Justin Rousseau, and Thomas Sefton had the goals in Saturday's loss.

On Sunday, the Trappers fell 3-1 to the Nickel City Sons. Cooper Brazeau had the lone goal in the loss.

The North Bay & District Hopper Buick/GMC Trappers finished with a split in a home and home series against the Nickel City Sons over the weekend.

On Saturday, the Trappers fell 2-0 to the Sons in Chelmsford.

Meantime, the Trappers found their offence back home as Nate Gravelle had three goals in a 6-2 Trappers win Sunday morning in Powassan.

Jesse Lefebvre, Jacob McGill and affiliate Ethan Lamothe had the other goals.

The Trappers are back in action this weekend in London as they take part in the Wendy Dufton Memorial Tournament.

The North Bay & District Minor Peewee AAA Trappers faced off against the Sudbury Wolves this weekend as the regular season got underway. Game one found the Trappers down 3-0 going into the third. Trappers winger, Ben Brunton, snuck a backhand past the Sudbury netminder early in the third to put the team on the board. Defenceman Michael Dech went end to end, potting his first of the season in an effort to come back.

Trappers goaltender Terry Bradley battled hard against the Wolves, allowing the Trappers a chance at a win. However, the Trappers fell to the Wolves 3-2 in the end.

Trappers winger Mason Fike opened the scoring for the second game after linemates Ethan Roy and Ben Brunton generated an aggressive forecheck in the offensive zone.  However, Sudbury bit back, scoring two.

Roy lit the lamp, with help from linemates Brunton and Fike, to tie the game.

The Wolves found the net in the third, ending the game 11-2.

In the final game of the weekend, the Trappers fell 11-1 with Cayden Hill scoring the lone goal in the setback.

The Trappers will face off against the Soo Greyhounds this weekend in North Bay.

Rosy finish to the weekend as Battalion beat Steelheads in OT
Feb 16, 2020 7:08 PM
Comments
We welcome your feedback and encourage you to share your thoughts on this story. We ask that you be respectful of others and their points of view, refrain from personal attacks and stay on topic. To learn about our commenting policies and how we moderate, please read our Community Guidelines.