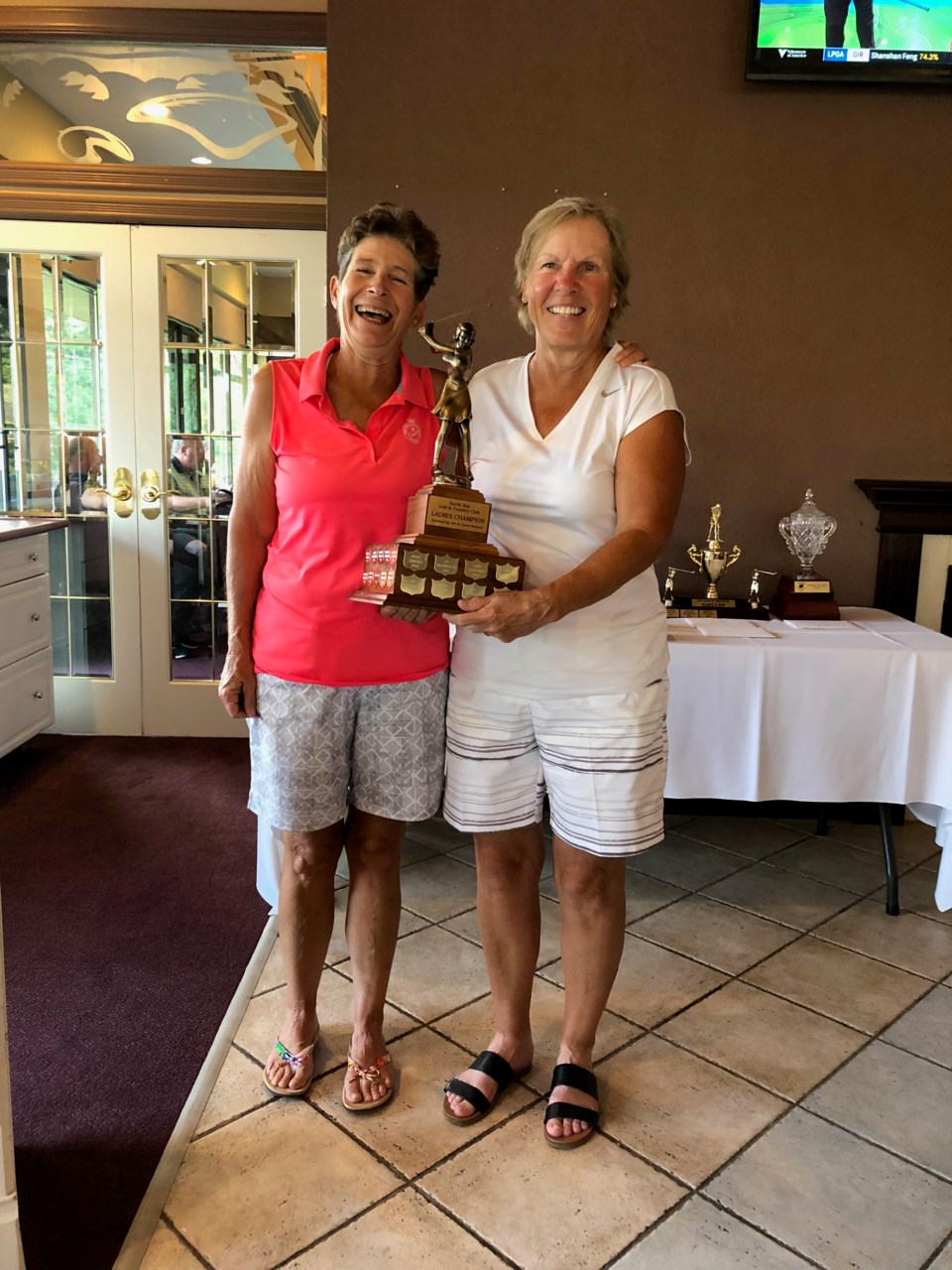 Thirty local golfers beat the heat this past week with 36 holes of golf at the North Bay Golf and Country Club's Women's Championship. With lightning-fast greens and stiff competition, long-time member Sylvia Taus claimed a one-stroke victory. Runner-up to Taus was Kate Bondett, a former Carleton U varsity player who shot a 78 on the second day of the championship.

BayToday.ca spoke with Taus and Bondett after their last putts.

BayToday.ca: How did you fare for the big day?

Taus: I shot 77 on the first day of the Club Championship and 85 on the second day.  I had a bad case of nerves on day two!  I had to text my husband to come out and settle me down!!

BayToday.ca: What is your best score at the club?

Taus: I think that I have shot a 73 at the NBGCC - which is even par for women; however, I may be confusing it with my score at my home course in Florida!

BayToday.ca: How long have you been golfing? Have you always been a member of the club since you started? If not, where else?

Taus: I've been golfing for approximately 20 years and it's always been at the NBGCC.

BayToday.ca: Are you originally from North Bay? If not, where from?

Taus: We're originally from Sudbury but have made North Bay our home for the past 45 years.

BayToday.ca: When did you retire from Canadore? What was your focus as a professor and dean?

Taus: I retired from Canadore College in 2004 after a 20-year career as a professor, coordinator, and subsequently a dean.  In my final years at the college, as Dean of the School of Aviation, I had the privilege of going to China to create a partnership that still sees students from Guangzhou attend Canadore College.

BayToday.ca: Have you lived beside the course for a while? How do you like it?

Taus: We've lived in our current home on hole 16 for the past 10 years.  We have our own golf cart so we'll often grab our clubs and go out to play a few holes, especially around Club Championship time!!

BayToday.ca: You mentioned facilitating social events for the club. What was your favourite aspect of hosting?

Taus: When I was president and captain of the ladies' section, I hosted a wine and cheese for the yearly CC.  The ladies who finished early would come over and, weather permitting, we would sit on the deck and cheer on those ladies who were finishing the last few holes.  One year, we were rained out for the first day, so we had a euchre tournament at the house.  I always felt that by hosting this event, it created a real camaraderie among the ladies section.

BayToday.ca: What’s your favourite hole on the course?

Taus: I can't say that I have a favourite hole on the course - on any given day, it's the one I've either birdied or parred.

BayToday.ca: Do you drive for show or putt for dough? What is your favourite club in your bag?

Taus: Lately, I've been driving the ball well but I would say that my strong point is my putting.  So, my favourite club in the bag is my putter.

BayToday.ca: How many times have you claimed club champion?

With this win, I have been CC at NBGCC twice; I've also been CC at our Florida course twice.

BayToday.ca: Did you teach your son Nathan to golf?

No, I did not teach our son, Nathan, to golf.  He laments the fact that we signed him up for tennis and not golf during his early years; he only took up golf about six years ago but being the athlete that he is, he's doing alright at it.  However, his five-year-old daughter participated in the pre-junior golf program at NBGCC and shows promise!

BayToday.ca: What pro would you like to golf with?

Taus: I would consider it an honour to golf with Brooke Henderson.  She goes about her business quietly but with great results.  I think she also battles nerves because, at the last few tournaments, she's been leading but unable to seal the deal.

Taus: A couple of years ago, I was playing in a CC in Florida with a one-shot lead going into the par-3 17th hole.  My opponent hit her shot into the bunker so I was feeling pretty good - until I shanked my shot into the water!!  Once again, my nerves got the better of me!!  I re-loaded and hit a decent shot above the pin and made the putt for a four - and tied the hole.  I went on to win the CC by one shot.

BayToday.ca: Who are your favourite local golf partners?

Taus: We're fortunate at NBGCC to have an active ladies' section; I can have a game any day with a variety of partners.  I'll play with anyone who will play with me!!

BayToday.ca: What do you like best about the Country Club?

Taus: I love the challenge that the course provides every time I play.  We always say that if you can play NBGCC, you can play anywhere.

BayToday.ca: Do you have any advice for aspiring golfers?

Taus: To aspiring golfers, I would say Have Fun!  Nobody cares what you score except you! There's nothing like sitting on the deck after a round with your golfing buddies and just enjoying the moment.  It's such a great feeling when I return from Florida in the spring to see my golfing buddies for the first time!