OHL appears to have government support in fight against paying players 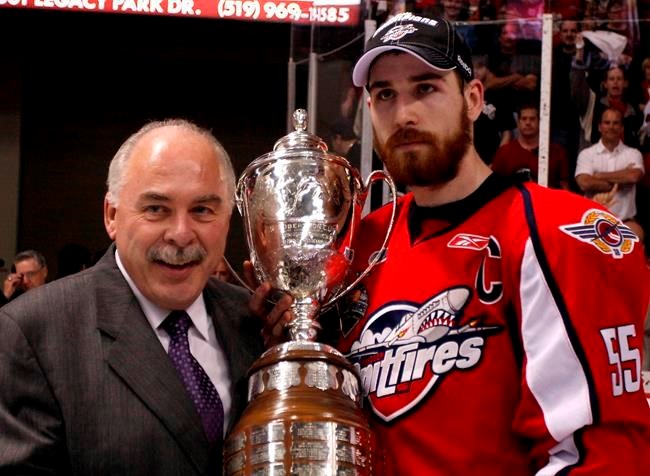 Commissioner David Branch is standing firm in his belief that the players in the Ontario Hockey League are there for the love of the game, and shouldn't be getting paid for their services.

It appears that the Ontario government agrees.

Branch sent a letter to the provincial government on Monday as an effort to keep the league's 425 players under the title of amateur athletes, and not allow them to potentially become employees regulated by provincial employment standards legislation, like some people are trying to make happen.

The government responded to Branch's letter on Thursday, with Michael Tibollo, Minister of Tourism, Culture and Sport, offering support.

"I want you to know, that our government is behind you," said Tibollo. "We are going to do everything in our capacity to grow and support the Ontario Hockey League and junior hockey across our province.

"I want to reassure the OHL and the people of Ontario that we are actively looking at providing this clarity to the OHL and we will have more to say in the coming weeks."

Branch, who also serves as president of the Canadian Hockey League, which the OHL is part of along with the Western Hockey League and Quebec Major Junior Hockey League, has always considered major junior players — typically ranging from 16 to 20 years old — as student athletes.

Players are currently eligible for post-secondary school scholarships, with each season spent in the league being worth one year of tuition, books and compulsory fees. Players also get money for out-of-pocket expenses, equipment, billeting and travel costs while on a CHL roster.

"To us it's the best scholarship program in North America, it's the hallmark of our player experience," said Branch.

"In addition we have concussion management, mental health programs, we do drug education and anti-doping. We have taken a position in what we believe the right thing to do is — that's to help develop our players."

But not everyone agrees with Branch that what the players get in return for their services is enough and that's led to him having to fight to keep the league the way it is.

In 2014 Toronto lawyer Ted Charney filed a $180-million lawsuit against the CHL on behalf of all current and many former players for outstanding wages, overtime pay, holiday pay and vacation pay. Sam Berg, a former Niagara IceDogs forward, and Daniel Pachis, a former member of the Oshawa Generals, were recognized as the representative plaintiffs against the OHL when the lawsuit was certified in March 2017.

If the Ontario court system rules in favour of the players, Branch says it could put some teams out of business while the programs currently being offered would have to be re-evaluated.

"If we were forced to pay minimum wage then it would undoubtedly have an impact on the various programs we currently provide," said Branch.

"The player experience is a very significant investment on our part."

If players were to be paid the $14 hourly minimum wage in Ontario for a 40-hour work week over an eight-month season, it would cost the OHL somewhere in the range of $8 million a year.

The letter addressed to Ontario Premier Doug Ford and Tibollo, says that there were 321 OHL graduates using their scholarship at a cost of $3.125 million in 2017-18. This year, teams also spent $475,000 on scholarships for current players.

It also said that "Our players, together with their parents and with the support of player agents, enter and continue to play in the OHL clearly understanding that they are participating in amateur athletics."

Player agent Allan Walsh voiced his displeasure with the letter on Twitter when he saw it.

"Why does the OHL feel they are authorized to speak on behalf of Player Agents? I'm perfectly capable of speaking for myself. Several agents (myself included) feel Major Junior players are NOT amateurs. This is just an attempt to avoid paying players minimum wages."

The OHL's move came after virtually all other jurisdictions in which CHL teams play have reviewed this issue and already passed exemptions/clarifications, including Quebec, New Brunswick, B.C, Saskatchewan, Nova Scotia, Manitoba and Prince Edward Island, as well as Washington and Michigan.

"(The letter) is to work with the Ontario government like we've done in seven other provinces across the country, to confirm what we always believe is the fact our players our amateur athletes, not employees," Branch said.

"One of the great questions is 'when does the game start being fun, when does it start becoming purely a business?' And I don't know the answer for that, but I do know that when you look at the players that have had great success they played the game because they love it."

AROUND THE CHL: Portland forward Joachim Blichfeld is the CHL player of the week after producing four goals and nine points in three games, all victories to help his Winterhawks move into second place in the WHL's U.S. Division. The 20-year-old from Frederikshavn, Denmark has 35 points in 17 games to sit third in WHL scoring. He was selected by the San Jose Sharks in the seventh round of the 2016 NHL Draft.

— Joseph Raaymakers of the London Knights earned the CHL goaltender of the week honours after posting a .965 save percentage in back-to-back wins, including a shutout victory. The 20-year-old overager from Chatham, Ont., turned aside 55-of-56 combined shots to lead London into a first-place tie in the Midwest Division. Raaymakers is playing in his fifth OHL season and went undrafted by NHL clubs.

Kyle Cicerella's junior hockey notebook will be published every Thursday.