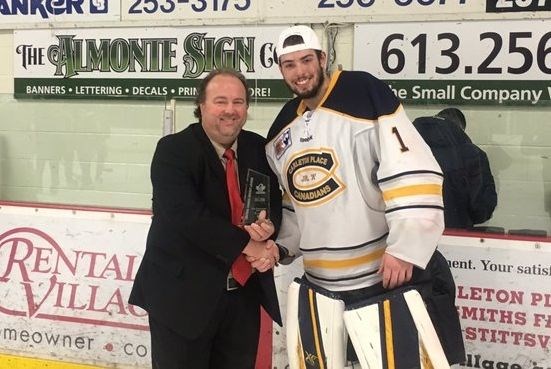 For North Bay's Colton Point, the last two games of the Central Canada Hockey League season illustrated the promising goaltender's progress on the mental side.

The 18-year-old Point, who is a highly rated goalie for the 2016 NHL draft, was selected playoff MVP on Sunday after his Carleton Place Canadians won a third consecutive league title after a decisive  3-2 Game 7 home win against the Ottawa Jr. Senators. The clincher came just hours after the Canadians lost by touchdown – 7-0 – in their first chance to eliminate Ottawa. Point refreshed after that setback and made 28 saves in Game 7 to wrap a 'tender triple crown of leading the CCHL with a 1.82 playoff GAA, .933 save percentage and five shutouts.

“By the time we got off the bus in Carleton Place after Game 6, I don't know if I was over it, but I wasn't angry more,” relates Point, who is committed to playing NCAA Division I college hockey at Colgate University. “I was taking the lesson from it, but I wasn't mad at myself anymore. That's a big part of goaltending – just being able to move on, and not dwell on things.

“A lot of the goalie coaches I've had – like Kyle [Aubut] in North Bay, and Eli [Rassi] here with the Canadians, they've all preached mental toughness,” Point adds. “You can be the most technically sound goalie in the world, but if you cannot think the game and get over things, you're not going to be a good goalie. They've really helped me figure out how to deal with stress and pressure. I used to be pretty hotheaded when I was younger and that affected my game a lot. I've learned how to focus my energy on other things.”

Five games in the series were one-goal contests, including a pair where Point and the Canadians required overtime. The 6-foot-4, 219-pound Point validated why he is fourth in NHL Central Scouting Service's recently released final North American goaltender ranking. Point attributes his rise in the rankings to working on the elements of hockey that are played between one's ears, not just between the pipes.

“I just think I finally felt comfortable. I felt like I had put all the external distractions away. I wouldn't, say let something that happened at school bother me. I came in more focused. Sure, I maybe got faster or something. But most of my development this year has been mental, in my opinion.”

Next up for Carleton Place is the Fred Page Cup. The four-team eastern Canada regional begins May 4 in Woodstock, New Brunswick. The winner will be off to  Lloydminster, Sask., for the RBC Cup, where the 2014 and '15 Canadians were stopped one win shy of national Junior A supremacy.

“It will be a little more high-pressure situation sort of stuff,” Point says. “You can't have an off-game. But the approach needs to stay the same.”

It would be easy to take Carleton Place winning the CCHL and competing the regional and national championships for granted. These Canadians contended with a seemingly season-long injury bug, along with a valiant challenge from Ottawa.

“What helped us the most was the nice 12-day break during the playoffs,” says Point, who had a team-record seven shutouts during the regular season. “That was probably our saving grace.”

Point's parents and grandparents were among those who squeezed into Carleton Place Community Centre for the decider. Whatever awaits Point in hockey, some memories were made last weekend.

“When we scored the first goal, it felt like the building was going to explode. It's such a small rink and we packed so many people in there, it's incredibly loud. That's just another motivating factor, the fans screaming 'go Canadians go.' ”

About the Author: Neate Sager