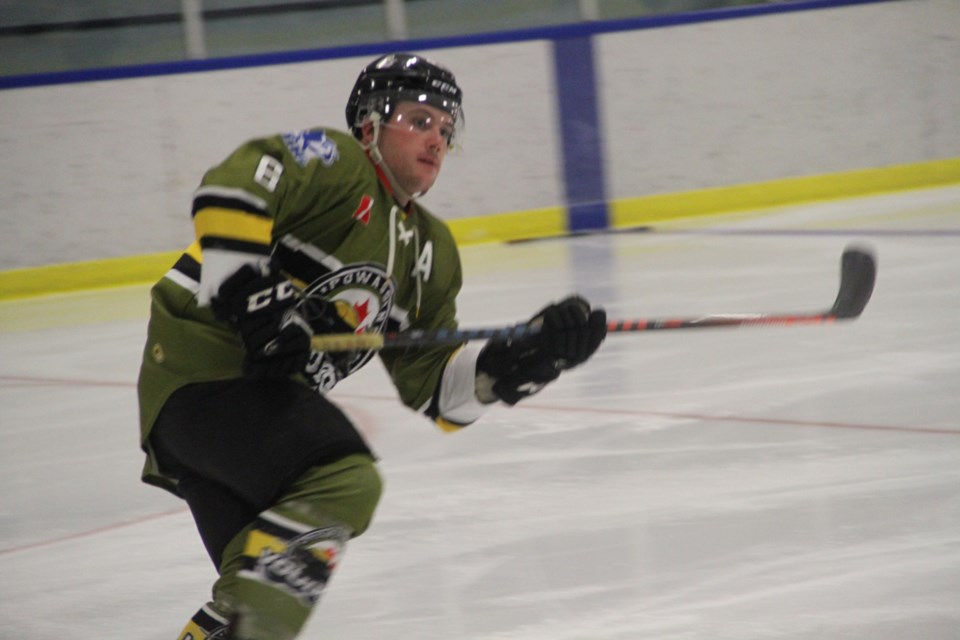 Eric Mondoux had two goals in a 3-2 OT win over the Timmins Rock. File photo.

TIMMINS, ON - Eric Mondoux’s second goal of the game, which came on a clear-cut breakaway 28 seconds into overtime was the difference as the Powassan Voodoos pulled out a narrow 3-2 decision over the Timmins Rock in a thrilling Northern Ontario Junior Hockey League contest Friday night in front of 1,232 spectators at McIntyre Arena.

Mondoux also opened the scoring 3:18 into the contest as he converted on an early man-advantage opportunity.

Powassan picked up the lone marker in the second stanza as well with Ryan Mills picking up his 17th of the campaign deep into the session.

Battling back in the third, Timmins got on the board just past the three-minute mark as Tyler Schwindt buried his 15th of the year to make it 2-1.

Continuing to press, the Rock collected the equalizer at 12:05 with Riley Brousseau evening the affair at 2-2.

The Voodoos had a tremendous chance to win in regulation with a late power play, but a diving Schwindt robbed Seiji Martone of a sure-goal by coming across the crease and blocking an apparent go-ahead effort off the goal line at 19:15.

Heading to OT, Mondoux scooped up a loose puck in his own zone and proceeded to dart down the ice by myself before depositing the game-winner into the left of the net past Timmins netminder Vance Meyer to end it.

"Obviously we’re in a tight race for first against them and it was a great feeling to score that OT winner in front of a crowd that’s always against us and to take over first place," said Mondoux.

The victory moves Powassan two points ahead of Timmins in the race for the NOJHL’s regular-season title, with the Voodoos also holding a pair games in hand on the Rock.

Owen Say finished with 33 saves to collect the win for the visitors while Meyer faced 25 shots in defeat helping the hosts earn one point.

The Voodoos are back on the road Saturday night when they travel to Cochrane to take on the Crunch.

Battalion select Ty Nelson first overall
Apr 3, 2020 2:30 PM
Comments
We welcome your feedback and encourage you to share your thoughts on this story. We ask that you be respectful of others and their points of view, refrain from personal attacks and stay on topic. To learn about our commenting policies and how we moderate, please read our Community Guidelines.