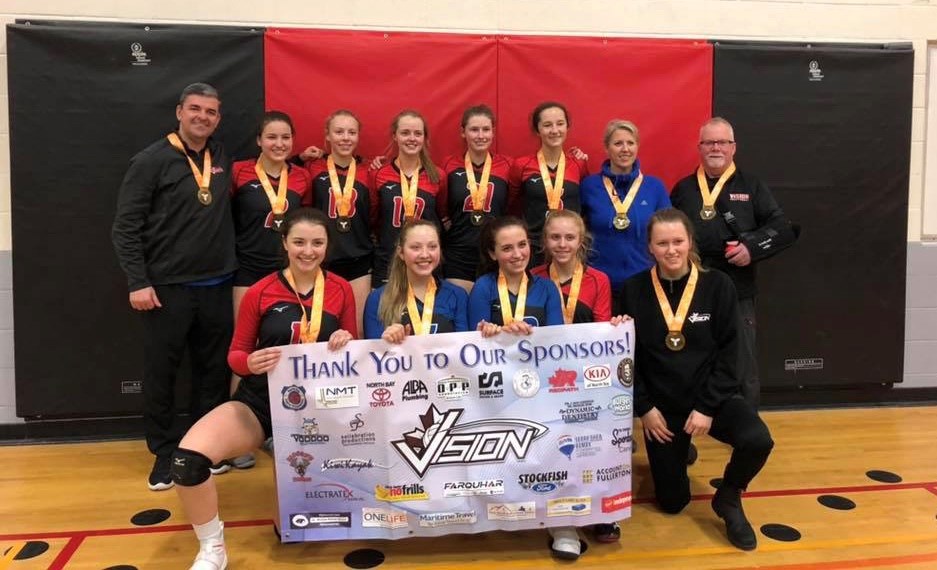 It was an exciting weekend for the Vision Club.

The Volleyball Club had 3 teams in action this weekend.

The 17UG attended an 18UG event in Oshawa and after a very intense 3 set (25-16, 13-25 and 19-17) final match vs Maverick Gold Rush out of Ottawa, the team brought home gold. With this gold medal finish the 17UG squad will advance to the Premier Division for 18UG. This places them in the top 10 in the Province for an age division higher.

Coach John Jeffries is very proud of the team and how they battled to bring home the gold.

The 16UG competed in Barrie at the OVA McGregor Cup. They too had a very successful day. The highlight of the day for Coach Murray Doucette was a match they were down 19-24. They pushed hard to come back and win that set 27-25. The girls brought home a silver medal in the final’s vs Lindsay Invasion. The teams next event is March 23.

The 15UG were also in action, playing up for a 16UG event in Brampton. The team faced some tough competition and took several games to 3 sets. Coach Danny Gosselin is happy with the girls play and their development.

They are preparing for their next event which is the Capitol Hill Classic in Washington, D.C.

The team along with the 14UG are heading off this week. The event is the largest tournament in the world being held over the Presidents Day weekend with attendance being over 950 teams, playing on 122 courts.

Vision adding some Weight to their program

Club President David Culin is very happy with the developments at Vision and the advancement the Club is making in the Province.

The Club known mostly for volleyball has recently ventured out into weightlifting and formed the Vision Weightlifting Club.

Athletes are being trained and coached by Danny Gosselin out of Gateway Physiotherapy at their newly built Vision High Performance Centre.

Brooke Allerston brought home silver from her first ever meet with a snatch of 42kg and a clean & jerk of 62 kg.

Coach Danny is very proud of the athlete’s progress and excited to have Brooke lifting. She also competed on the volleyball side of Vision and having a dual athlete is exciting.

With the newly formed weightlifting Club it is allowing us to reach new heights as a Club. Our volleyball program is being recognized as a high-level athlete development Club.