Some of the notable players to come up under Ford's watch in Barrie and move on to the NHL include Andrei Svechnikov, Rasmus Andersson, Kevin Labanc, Mark Scheifele, Andrew Mangiapane, and Aaron Ekblad.
Jun 23, 2021 6:30 PM By: Shawn Gibson 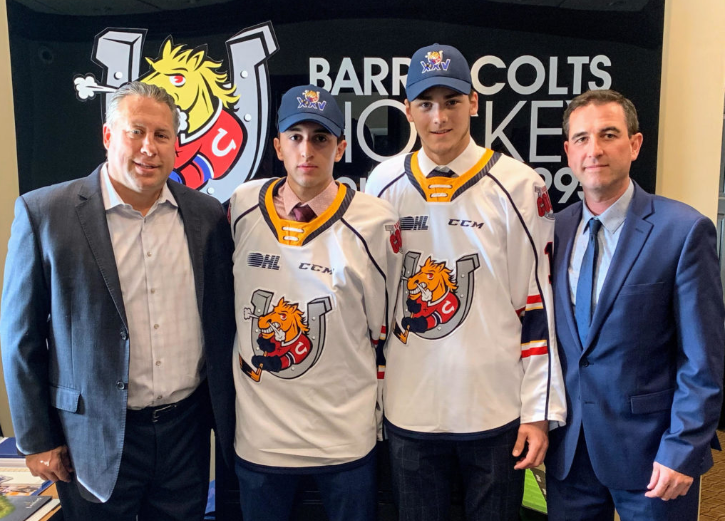 Longtime Barrie Colts general manager Jason Ford (far right) is no longer with the local OHL club. The team announced Wednesday that Ford "will be leaving the team to focus on new opportunities."

In a news release, the team says Ford will "focus on new opportunities."

In a phone interview Wednesday afternoon, Ford told BarrieToday he doesn't have anything set in stone for the future, but does have his sights set on a bigger stage.

“I would like to continue scouting, but at the NHL level,” said the 43-year-old. "I’ve always enjoyed scouting and bringing in the kids to Barrie. To do that at a higher level would be a great feeling.”

Some of the notable players to come up under Ford's watch in Barrie and move on to the NHL include Andrei Svechnikov, Rasmus Andersson, Kevin Labanc, Mark Scheifele, Andrew Mangiapane, and Aaron Ekblad.

Ford also reminisced about the successful years he had with the hockey club, and said watching the young talent come in and head off to the National Hockey League was always a highlight.

"When you draft these 15- (and) 16-year-olds and you get to watch them grow in the organization and then take that to the higher pro leagues, it really makes your day," he said. "You see some guys playing in the NHL now and they're using some of the things they learned here. It reminds you that you're doing things right by them and the club."

Ford is the longest-serving GM in the team's history. He started with the Colts in 2001 as the team's director of communications, was named assistant GM in 2006, and became GM and head scout in 2011.

The outgoing GM also thanked the fans for their loyalty and support over the years, as well as billet families, team staff and the players themselves, and wished them the best going forward.

In the team's news release, Colts president Howie Campbell thanked Ford for his service to the club.

“Jason has done a very good job in all of the roles he had with the team, especially as GM. Since 2011, when he became GM, we were the Central Division winners four times and three times finished second," Campbell said. "And 17 players were drafted to NHL teams with six players chosen in the first round. That’s pretty impressive.

"We are a development league in all aspects and we wish Jason all the best at the NHL level, which is where he is looking to take his career to the next level. We wish him all the best," Campbell added.

Ford said the death of longtime Barrie coach Dale Hawerchuk and the changes coming to the club didn't necessarily play a role in his decision to leave, but he says he misses the former bench boss a lot.

"Let's just say I am definitely already missing Dale, as we all are," said Ford. "He was a friend and mentor, but just a great guy. I just got going when he came in and I learned so much from him. I will always look back on these years as some great times. Me, Dale and Howie had a lot fun and a lot of success.

Hawerchuk, who was inducted into the Hockey Hall Hall of Fame in 2001 and joined the Colts in 2010, died in August 2020 after a battle with cancer.

The Colts say they will be announcing a new GM and head coach before the start of the 2021-22 season.

According to the team's website, former Colts coach Marty Williamson, who was previously with the team as head coach from 2004 until 2010, is currently the acting general manager.

About the Author: Shawn Gibson

Shawn Gibson is a staff writer based in Barrie
Read more