Former North Bay AAA Trappers forward is hoping to one day become a surgeon
May 21, 2019 11:26 AM By: BayToday Staff 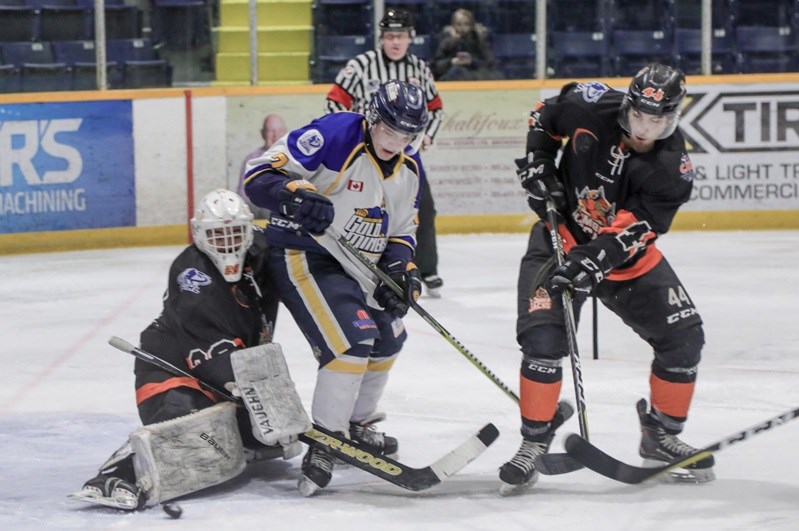 Hunter Foreshew (#7) battles for a puck in front of the Timmins Rock net in a game this past season. Photo submitted.

Hunter Foreshew of the Northern Ontario Junior Hockey League’s Kirkland Lake Gold Miners has been recognized with a national scholarship for his academic contributions during the 2018-19 season.

Hockey Canada, in conjunction with the Canadian Junior Hockey League, announced over the weekend that Foreshew was the recipient of the Nickerson Family Scholarship in recognition of scholastic success and will receive a $1,000 bursary to assist in his post-secondary education.

An Honour Student all throughout high school, Foreshew earned the highest class average in multiple courses he completed as he gets set to graduate later this spring.

Aiming to study Bio Medical Science in university with the intention to apply for medical school, he has an eventual goal of becoming a surgeon.

The 18-year-old former North Bay Major Midget AAA Trappers forward also had a solid first full season in Kirkland Lake on the ice as he contributed 25 points in 55 outings on a dozen goals, including a pair of game-winners, and 13 assists.

“The NOJHL would like to commend Hunter for his continued scholastic achievements while competing at a high level of Jr. A hockey,” stated league commissioner Robert Mazzuca in a release.

“The commitment shown by all of our student-athletes, again this season, is a compliment to not only the players, but to each of the club’s coaching staffs and educational advisers for their understanding and realization of the importance of schooling as they move forward in their careers and lives away from the game,” added Mazzuca.

With Leafs camp behind him, Brazeau looking to make waves with Marlies
Jan 14, 2021 1:00 PM
Comments