Lakers Sports - tough night on the court and on the ice

Rams humble both Lakers basketball teams while Lakers women fall to Gryphons on the ice
0
Feb 9, 2019 6:20 AM By: BayToday Staff 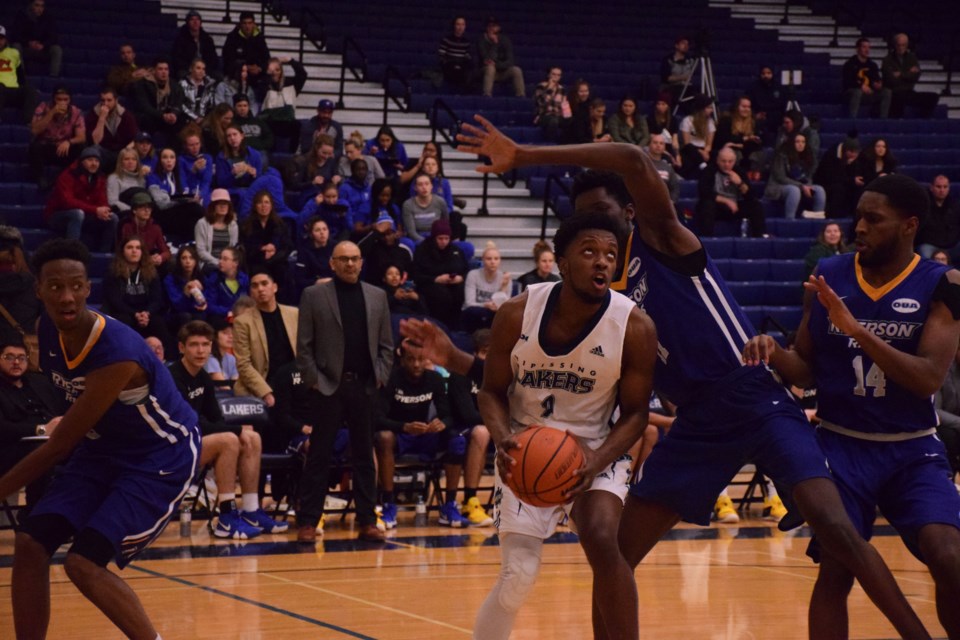 Facing one of the top teams in the country, the Nipissing Lakers men’s basketball was unable to keep pace despite a solid effort.

Ryerson led from the get-go and cruised to a 96-60 win over Nipissing Friday night at the RJS Athletic Centre.

Ryerson led by eight after the first and was up 46-29 at the halftime break, catching fire late in the second quarter just before the teams hit the intermission.

Nipissing pushed back early in the third, but fell behind by seven more as the Rams extended their lead, outscoring the Lakers 22-15.

Down in the fourth, the Lakers posted another 16 points to try to close the gap, but the Rams closed out the game in style and picked up the victory.

Marcus Lewis with 13 points, while Quintin Ashitei added 10 in the contest.

Up against a very tough opponent and one of the top teams in the OUA, the Nipissing Lakers women’s basketball team knew they had their hands full.

While they battled and showed heart, like they always do, they did fall to the Ryerson Rams by a final of 80-44 Friday night at the RJS Athletic Centre.

They used that to build up a 22-11 advantage after the first quarter.

The Rams posted another strong quarter, outscoring Nipissing 20-9 to take a 42-20 lead into the halftime break.

Nipissing had their best quarter in the third, but so did Ryerson.

The Rams topped the Lakers 23-16 in the frame to head into the fourth quarter in control of the second matchup of the year.

In the fourth, with the game likely out of reach, the Lakers pushed, but it wasn’t enough, as they came up short, falling to the 16-4 Rams.

The final score read 80-44 in favour of Ryerson after 40 strong minutes from both programs.

The Nipissing Lakers women’s hockey team proved they can skate and play with anybody Friday night.

Despite a 4-2 setback to the first place Guelph Gryphons, the Lakers stood tall and hung around for the 60 minutes.

Guelph kicked off the scoring, finding the back of the net twice in the first period.

Down 2-0 after 20 minutes, Nipissing responded with a pair of their own in the middle frame – both on the power play.

First, Hunter Mosher got the Lakers on the board.

Madison Solie and Brianna Gaffnery grabbed the helpers as the Lakers cut their deficit in half.

Less than two minutes later, Jetta Derenoski tied the game as she continues her strong season.

Unfortunately Guelph tallied twice in the final period to take a lead and come away with the victory.

Mercedes Chircop finished with 21 saves, while Nipissing fired 32 shots at the Guelph net.

Puck drop is set for 7:30 p.m., but the Lakers will honour their senior athletes prior to the game – beginning at 7:15pm.