Women's Hockey - Lakers fall in OT It wasn't the end the Nipissing Lakers women's hockey team was looking for as they wrapped up the regular season.
Feb 10, 2019 8:03 AM By: BayToday Staff 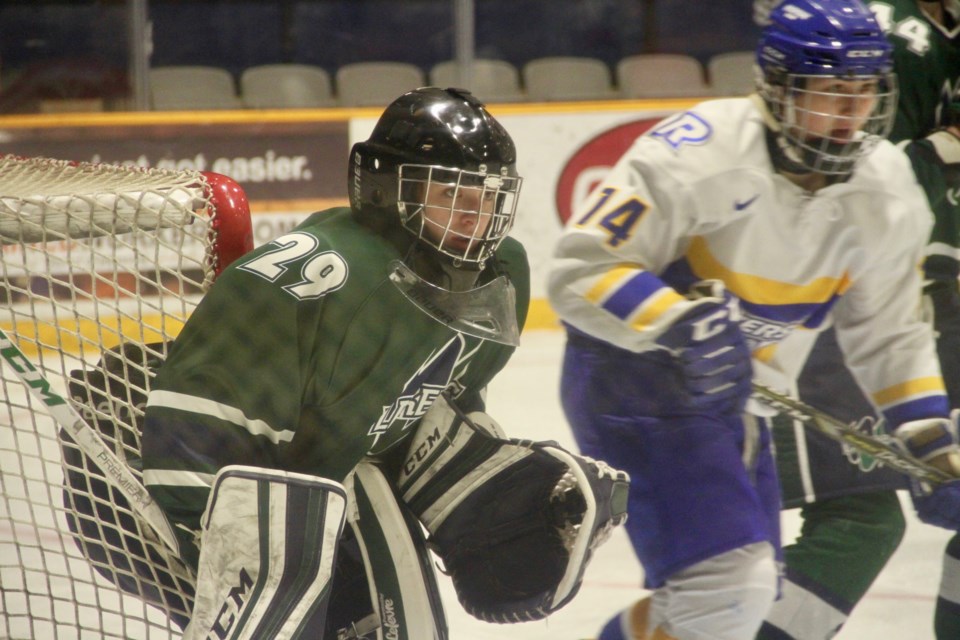 Lakers goalie Danika Ranger in action. File photo.
Women's Hockey - Lakers fall in OT
It wasn't the end the Nipissing Lakers women's hockey team was looking for as they wrapped up the regular season. Nipissing came up short, losing 2-1 in overtime to the visiting Brock Badgers in the final game of the season, as the Lakers prepare for playoffs. Hunter Mosher opened up the scoring in the first period, set up by Taylor McManus to give Nipissing the 1-0 lead. That advantage lasted until the final 30 seconds of the game when Brock tied the game. The Badgers then won it less than a minute into the overtime period to grab the extra point.
Danika Ranger finished with 21 saves, but was tagged with the loss, while Nipissing fired 28 shots at the Badgers net.
The Lakers are off next weekend before playoff start on Wednesday, Feb. 20.
Men's Hockey - Lakers dumped by Gee Gees
The Nipissing Lakers men's hockey team lost 6-2 tonight to the Ottawa Gee Gees on the road. Kylor Wall and Colby Tower had the Nipissing goals, while Domenic Graham finished with 31 saves. NU faces RMC to close out the regular season Sunday afternoon at 2pm.
Women's Volleyball

The Nipissing Lakers women's volleyball team dropped today's contest against the powerful McMaster Marauders on the road. The final was 3-0. Shayla Kessler led the Lakers attack with 8 kills and 9 points, Cassie Dobson added 8 points and Shannon Lebreux had 7 in the match.  Nipissing is back in action Sunday when they face the Brock Badgers at 1pm.

Men's Volleyball - Lakers swept by Marauders
The Nipissing Lakers men's volleyball team fell in straight sets to McMaster this afternoon. Curtis MacPherson led the attack with 7 kills and 8 points, Steve Wood had 6.5 points and Liam Ludlow picked up 6 points in the contest.
Nipissing will look to bounce back when they face Brock Sunday afternoon at 3pm on the road.
Women's Basketball - Blues slip by Lakers

The game went to the wire and while the final decision didn’t go their way, the Nipissing Lakers women’s basketball have nothing to hang their heads about.

The teams went back and forth, with Toronto outlasting Nipissing and coming away with a 64-56 victory.

Nipissing led 14-12 after the first quarter, with Toronto bouncing back in the second frame, outscoring the Lakers 17-11.

With the score 29-25 at the halftime break, both teams posted 14 points in the third quarter, sending the teams to the fourth with the game in the balance.

Toronto edged Nipissing 21-17 to come away with the win and spoil Nipissing’s final home game.

Nipissing finishes their season up on the road next weekend.

What a way to finish the home portion of the regular season.

The Lakers came up with a big win Saturday night over the visiting Toronto Varsity Blues, edging them 82-80 in their home finale for the 2018-19 season.

Nipissing held at 19-18 lead after the first as both teams came out strong in the beginning of an exciting matchup.

The Lakers took control in the second, outscoring Toronto by nine as they took a 10 point advantage to the halftime break.

Up 42-32 heading into the second half, the Lakers lead was reduced as Toronto outscored them by five.

In the final quarter, both teams left everything on the court and while Toronto cut into the Lakers lead once again, they came up just short.

Nipissing clamped down late, scored some key baskets and got some key stops to come away with a thrilling victory.

The Lakers showed great balance tonight in the victory as 5 players hit double-digits. Marcus Lewis led the way with 18 points, Will Tran had 17, Quintin Ashitei had 15 and both Marvin Ngonadi and Kalil Langston had 10 points.

The Lakers finished the weekend with a split. They'll hit the road next weekend to wrap up the regular season.