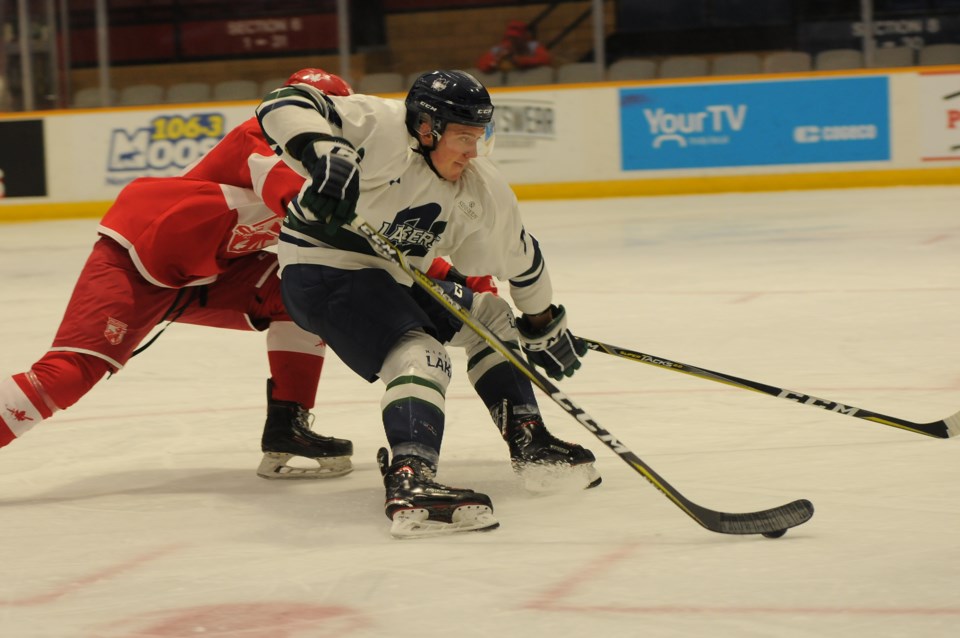 Photo courtesy Brian Doherty.
A night after a thrilling shootout Friday night, the Nipissing Lakers men's hockey team and the RMC Paladins were back at it Saturday to wrap up their weekend.

This time, the Lakers controlled the game and cruised to their third win of the young season, topping RMC 5-2 and improved their record to 3-0-1.

The game started off far more tentative than Friday's contest and the first goal didn't come until the final minutes of the opening frame.

With just over six minutes left in the period, Danny Desrochers found the back of the net to give Nipissing a 1-0 lead - an advantage they would take into the intermission.

Brock Welsh and Jacob Collins earned assists on Desrochers' first of the year.

In the second, the early portion was controlled by special teams, but once all the dust settled, it was the Lakers who added to their lead.

Jacob Hickey banged home a rebound to make it 2-0 Lakers, with the goal coming just over six minutes into the middle stanza.

Brett Jeffries and Devyn Mayea picked up helpers on the second Lakers tally of the night.

Nipissing would add to their lead with 6:54 left in the second period when Gael Lubwele fired home his second of the year from the side of the net.

Drake Lindsay and Mayea, with his second of the night, picked up assists on the power play marker to extend the Lakers lead.

RMC would cut into the Nipissing lead, scoring a power play goal with just 1:45 left in the period.

The first half of the final period was pretty quiet as the Lakers looked to lock things down.

Looking to seal the win, the Lakers added a fourth goal, as Deverick Ottereyes stuffed in a shot that originally hit the post.

Ben Garagan and Tyler Brown picked up assists on the fourth Lakers marker.

Pushing to get back into the game, RMC pulled their goalie with over five minutes left in the game, but the plan didn't work, as the Lakers added theif fifth tally into the empty net.

RMC would get a goal back as they dumped the puck in, it bounced off the end-boards and off goaltender Talor Joseph and into the back of the net.

Aside from one bad bounce, Joseph was strong in net, finishing with 28 saves, as Nipissing held the 35-30 advantage in shots.

Nipissing is back in action next weekend with just one game, as they visit their rivals, the Laurentian Voyageurs Friday night.

Game time is set for 7:30 p.m. at Countryside Arena in Sudbury.