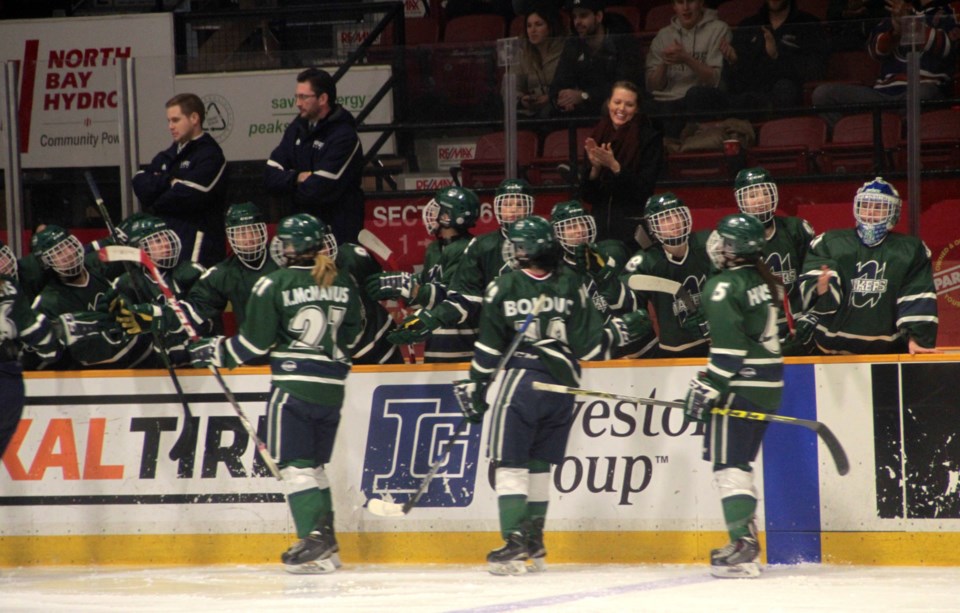 File photo.
In a battle of two of the top teams in the OUA, the Friday night contest between the Nipissing Lakers women's hockey team and the Toronto Varsity Blues didn't disappoint.
The Lakers battled back from an early 1-0 deficit with two quick third period tallies to defeat the Blues 2-1 at Memorial Gardens Friday night.

Power plays by both teams in the third period didn't result in anything, as the score remained 1-0 Toronto until 9:32 left in the period when Nipissing tied things up.

Britney Zack found the back of the net, with Maria Dominico earning the assist.

Less than a minute later, captain Jetta Derenoski buried a shot off the rush to give the Lakers the lead.

Nipissing locked things down for the rest of the period and held on for the 2-1 victory.

Danika Ranger finished with 22 saves, while the final shots read 25-23 in favour of Nipissing.

Nipissing is back at home Saturday night, when they host the Ryerson Rams, in the second game of their four-game homestand.

Game time is 7:30 p.m. at Memorial Gardens.
Meantime, not as good of a night for the Lakers varsity men's hockey team which dropped a 5-2 decision to RMC in Kingston Friday night. Kyle Lewis and Nic Vlahos scored for the Lakers in the setback. Goaltender Talor Joseph finished with 36 saves in the loss.  The Laker continue their eastern road trip Saturday night as they face the Ottawa Gee-Gees.
In basketball, the Lakers varsity women's basketball team fell short on the road, losing 75-73 tonight in double-overtime to the Laurier Golden Hawks. Nipissing is back in action Saturday night when they take on the Waterloo Warriors. Game time is 6 p.m. in Waterloo.