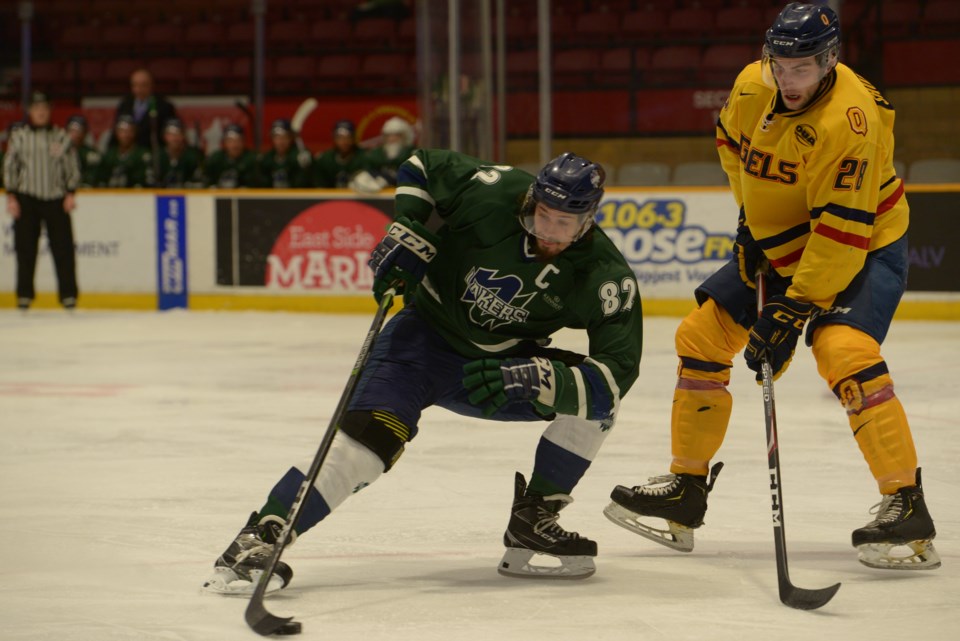 Photo courtesy Brian Doherty.
The OUA East Division is going to come down to the final few days of the regular season.

With five teams who are within five points of each other, including the Nipissing Lakers men's hockey team and Sunday's opponent, the visiting Queens Gaels, points and wins are huge this time of year.

After a tough loss Friday, the Lakers dropped their second of the weekend, coming up short, losing 3-2 once again.

In the opening frame, the Lakers struck early, just 25 seconds into the game, as Gael Lubwele fired a shot from the wing that clipped the post and found the back of the net.

It took about 15 minutes for the next goal of the game and it once again came off the stick of a Lakers forward.

A very solid period saw the Lakers come away with a 2-0 lead, also outshooting the Gaels 13-8 in the opening frame.

In the middle stanza, another early goal got the scoring started.

This time, it was the Gaels who found the back of the net, cutting into the Lakers lead.

The goal came less than two minutes into the period.

The Gaels tallied again quickly to tie things up just four minutes into the second, evening things up at 2-2.

Queens completed the comeback and took the lead late in the second period.

A power play marker with 44.2 seconds left in the second put Queens up 3-2 after 40 minutes of play.

With the Lakers controlling the play in the first and the Gaels dominating the second, the game came down to the final period.

In that third, there was no offence to report and the Gaels held on for the victory, escaping North Bay with a win and two points.

Talor Joseph finished with 34 saves, while Nipissing had 24 shots on the Gaels net.

The Lakers will hit the road for their next three games, taking on Carleton and Concordia next weekend and McGill the following weekend - all away from Memorial Gardens.

They'll return to home ice Friday, Jan. 31 for a matchup with McGill.