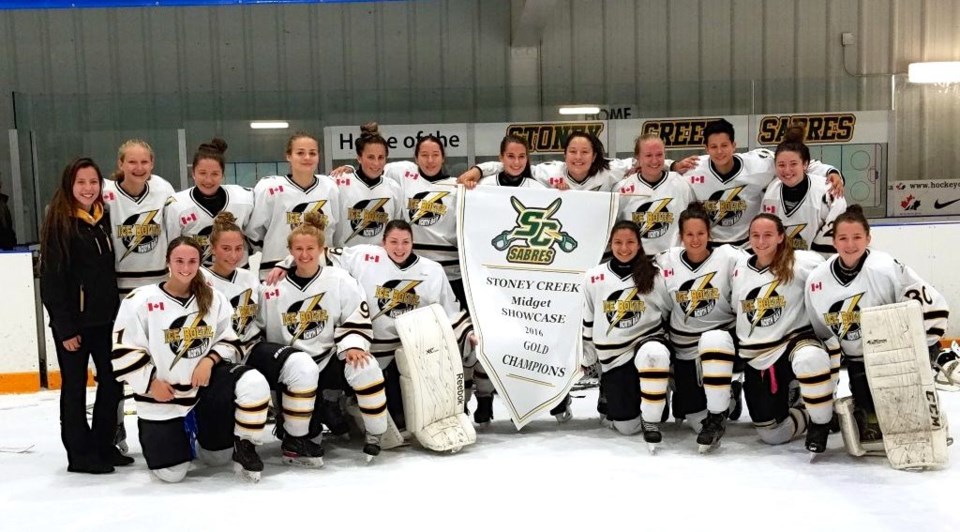 Of the 64 teams playing in the tournament , the top 8 teams advanced to the Gold medal round which commenced Sunday morning at 7.45 am.  North Bay's first playoff game was against a tough Oakville Hornets squad who also had 4 wins to their credit.  In a close game that went down to the wire, Maria Dominico score a highlight-reel goal to secure the first playoff win with 10 seconds left in the 3rd period.

The semi final match-ups saw another North/South battle as the Ice Boltz were pitted up against a surprising St. Catherine's Jr. Badgers team at noon.

The game was put out of reach in the 3rd period as the Boltz scored a couple of quick goals to put the game out of reach with the scored ending up 3-0.

Going into the Gold medal game against a strong Chicago Mission team at 4.15 pm, both teams knew they would have to overcome fatigue as it was the  third game of the day for each.  Mission was the stronger team early as they applied constant puck pressure forcing North Bay to play outside of their comfort zone.  A steady stream of penalties eventually cost the Ice Boltz as Mission scored a late power play goal in the first period to take a 1-0 lead.  Cassie Roberge was stellar in net and without her heroics the score could have been must worse.

The second period saw lots of back and forth action but into the later stages of the period North Bay began to control the pace of play with the Mission goaltender coming up big on more than a few occasions.

Heading into the third period behind 1-0 the Ice Boltz took early penalties that were effectively killed off and set the stage for a thrilling end to the period.  Mel Young put the Ice Boltz on the board with a goal off a rebound to tie the game at 1.  Chicago Mission however responded 2 minutes later with a breakaway goal to take a 2-1 lead with time running out.  The Ice Boltz responded with a sense of urgency after that goal and completely dominated the Mission team causing numerous turnovers.  A tremendous individual effort from winger Lily George with a minute remaining resulted in a big backhand goal notching the game at 2 to head to overtime.

In overtime, with the Ice Boltz playing 4x4, they continued to dictate the pace of play with numerous scoring opportunities.  Malory Dominico, North Bay's leading scorer in the tournament,  ended the suspense with a breakaway goal early in the 10 minute overtime period to seal the victory for North Bay.

- Cassie Roberge and Charley Wing shared the goaltending duties over the weekend and ended up allowing only 3 goals over the 7 games played.  Maria Dominico was named tournament Most Valuable Player.

- More information about the Ice Boltz Midget AA Hockey Club can be found at http://nbgha.com or contact Ray Irwin at 705-494-0048.