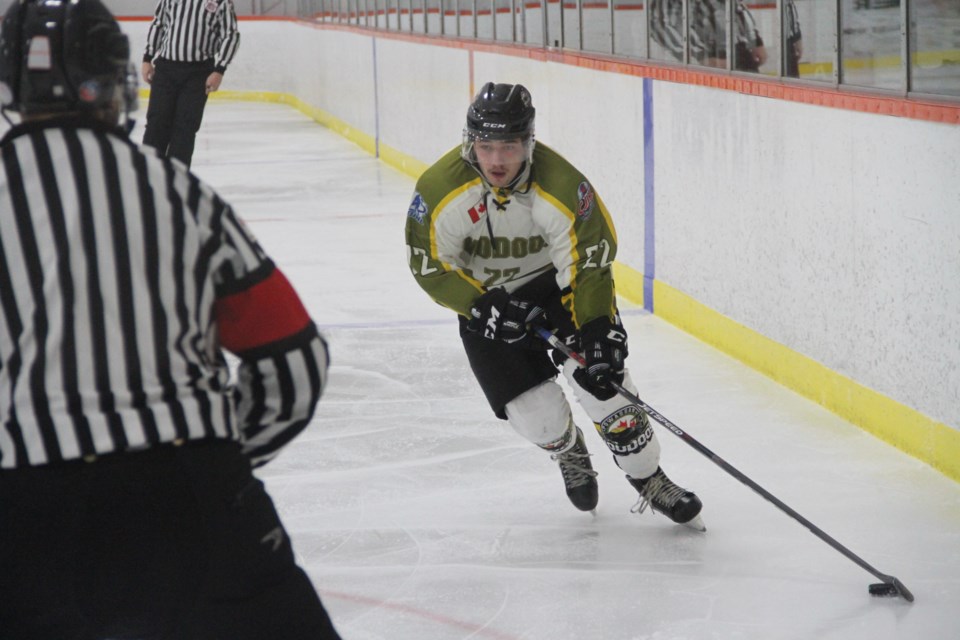 Mat Hardwick picked up a pair of goals as the Powassan Voodoos went on to a skate to a 5-3 victory over the Hearst Lumberjacks in a Northern Ontario Junior Hockey League encounter Saturday evening at Claude Larose Arena.

Hearst did open the night’s scoring just 1:51 into the contest as Trystan Mughal’s initial NOJHL tally gave the home side the early lead.

It stayed that way until the back half of the second stanza when the Voodoos struck three times in just over a six-minute span to gain the edge.

After Hardwick tied it at 11:40, Gregory Trudeau-Paquet and a man advantage marker from Parker Bowman put the Voodoos up 3-1 through two.

The visitors’ Hardwick added another early in the third, before the Lumberjacks counters with goals from Max Griffioen and Dominic Dumas brought Hearst back to within one with still six and a half minutes to play.

However, Gabby Kioki capped off the win for Powassan as his connected into an empty net in the final seconds to secure the road triumph.

Shots on goal favoured the Lumberjacks by a 34-26 margin with rookie netminder Luke Greenwood recording the win while Austin Madge suffered the loss.

The Voodoos are back in action on Sunday afternoon to complete their northern road trip as they face the Timmins Rock.  Puck drop is set for 2 p.m. at the MacIntyre Arena.