Dominico the hero as Lakers slip by Gryphons in a shootout

Maria Dominico scored the lone goal in the shootout for Nipissing, as they came away with the victory
0
Feb 14, 2020 10:45 PM By: BayToday Staff 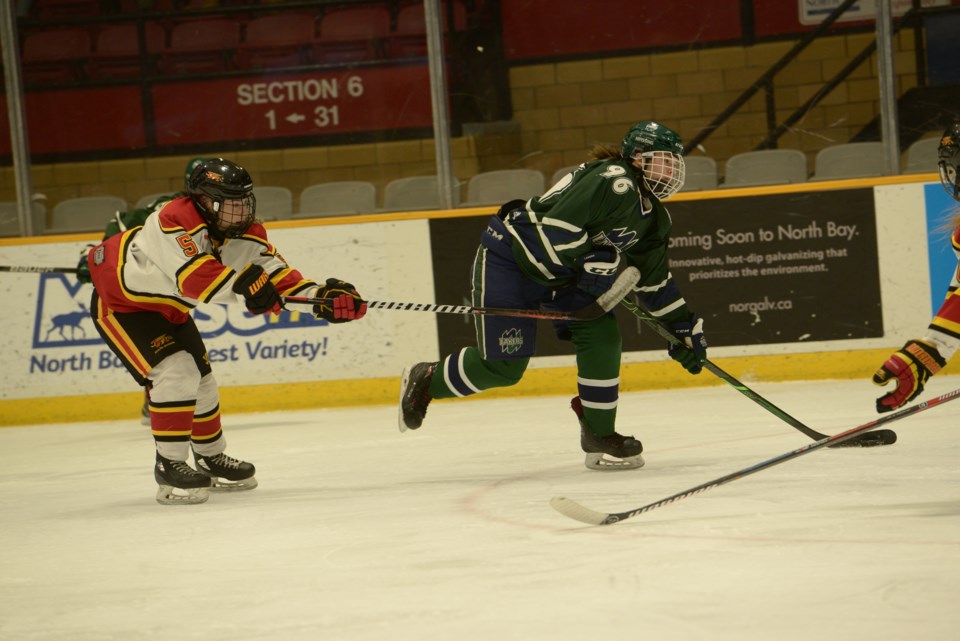 Photo courtesy Brian Doherty
After a tough weekend on the road, the Nipissing Lakers women's hockey team was looking to bounce back as they took on the Guelph Gryphons Friday night.

With a pair home games on the schedule this weekend, the Lakers kicked things off by earning a 3-2 victory in a shootout over the Gryphons.

In the opening frame, the teams traded chances early on, but the score remained 0-0.

Nipissing opened up the scoring with 3:07 left in the first as Katelyn Heppner found the back of the net for her second of the season.

Maggie McKee and Jetta Derenoski picked up assists on the goal.

Both teams had 10 shots after 20 minutes.

In the middle frame, the Gryphons tied the game early in the period as a shot from the slot found the back of the net.

The Guelph goal was the lone one of the period, as the teams finished two periods of play even, 1-1.

In the third, with the game tied, the Lakers took the lead thanks to a point shot through traffic from Allison Hayhurst.

Stacey Henshaw and Teagan Feltz earned helpers on the go-ahead goal, early in the period.

The Gryphons once again tied things up, scoring late in the third to send the game to overtime.

An exciting overtime period didn't solve anything and the teams headed to a shootout to decide the contest.

Maria Dominico scored the lone goal in the shootout for Nipissing, as they came away with the victory.

The Lakers are back in action Saturday night in their regular season finale as they host the Brock Badgers.