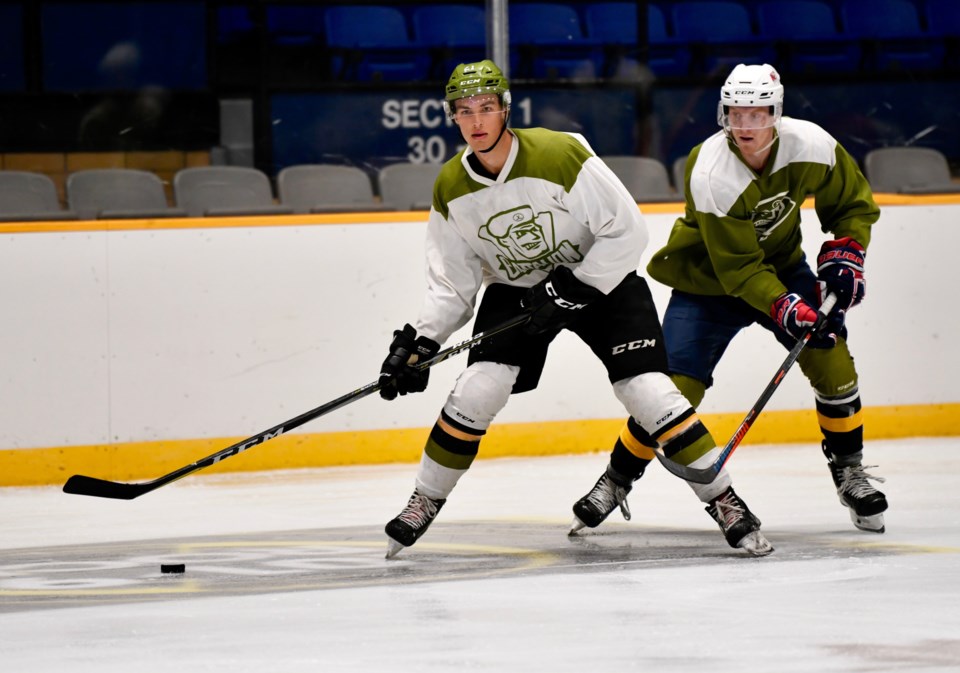 He may have only picked up 23 points in his rookie, season but Brandon Coe is hoping to build on those totals in 2018-19.

The 2017 third overall pick in the OHL Priority Selection that spring is expected to start the season in a top-six forward role manning the right side along with linemates Adam McMaster and Daniel Walker.

“I think there is probably more expectations on me this year with me being in my second year,” said Coe to the media Wednesday afternoon at Memorial Gardens.

“I hope I get more points and guide the rookies a bit.”

Coe felt some disappointment this summer after being left off the final roster for Canada’s Under-18 team for the Hlinka/Gretzky Cup tournament this August in Alberta.

He realizes that is part of the roller coaster ride of ups and downs in the game of hockey.  Coe just hopes to use his first year as a learning experience.

“You just have to bring it every night, you cannot take a night off,” said Coe.

“If you take a night off you are just sacrificing the team a game. If someone takes a night off then the team is not going and the score is not going to come out on our end and playing against older guys is a lot tougher, you have to get stronger in the off-season so it is a bit challenging.”

But Coe has one advantage going into his second season of major junior hockey.  Being born in December of 2001 is going to allow him another year of development before he is eligible for the NHL Draft.

“I think it takes some pressure off,” admits Coe.

“Most of the guys just get two years before the NHL draft but I get three.  That gets me more time to develop and hopefully get ready for my draft year.”

Coe and the Battalion are heading into their final two pre-season games this weekend as the team hosts the Owen Sound Attack Saturday afternoon and then the squad heads south to finish off the pre-season with a game against the Attack in Owen Sound Sunday afternoon.

Stan Butler, the Battalion head coach and director of hockey operations, has been away early this week at league meetings.  Forwards Matthew Struthers (Carolina), Kyle Potts (NY Rangers) and goaltender Christian Propp (Pittsburgh) all returned from their respective NHL rookie camps on Wednesday and are expected to be in the lineup this weekend.

However, Justin Brazeau has made it through rookie camp and will be joining the San Jose Sharks for main camp.  With the sudden loss of Luke Burghardt to a career-ending back injury, Brazeau is expected to be the focal point of the Battalion offence if he does not sign a pro contract first.

“Obviously 'Braz' had a great weekend in Kitchener and he is a big part of our team,” Butler added about Brazeau who led the team in scoring at the Kitchener Showcase event two weeks ago.

“I am glad he has gotten the opportunity to move on to the main camp from the rookie camp. If he does come back we will obviously give him some good experience.”

On the blue line, Butler is looking at a young core that lacks the size and physicality of the traditional Battalion line of defence.

Only the 6’5” Travis Mailhot, who has yet to play the pre-season due to a shoulder injury, is the only blueliner taller than 6’1” on the current roster.

“We are not going to be a typical Battalion defence with big, big defenceman that is really physical,” noted Butler.

“We will hopefully be a quick puck moving smaller defence.”

But Butler also admits he is still looking at ways to bring more experience to the back end.

“We have a very young group on D and they have got an opportunity but I do not think there is any doubt if an overage defenceman is there and we feel can help our team we will definitely do something,” said Butler.