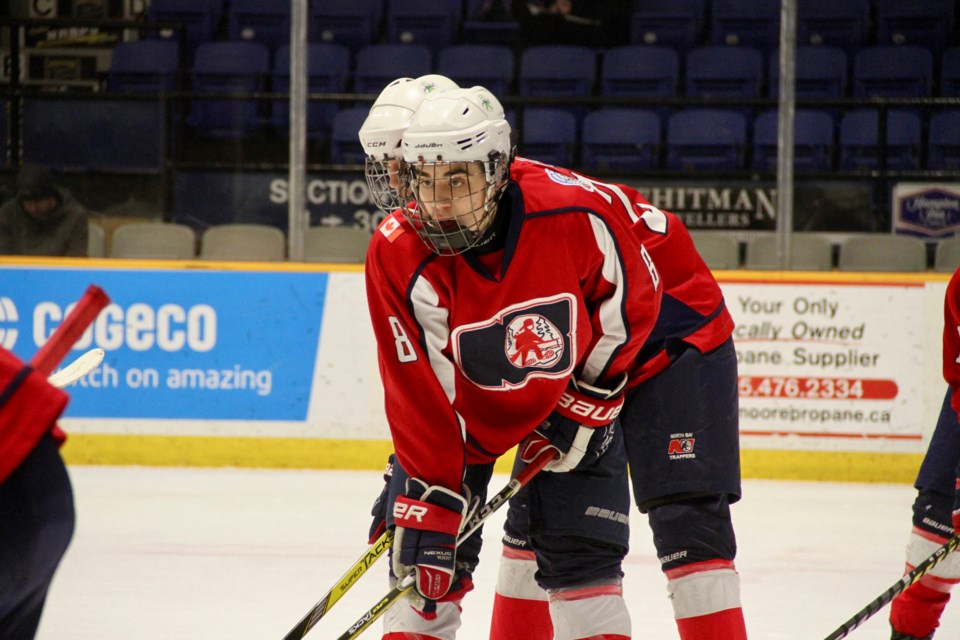 North Bay Trappers defenceman Payton Vescio, taken in the fourth round of the OHL Priority Selection, is one of six local players on the ice at this weekends Battalion Orientation Camp. Photo by Chris Dawson.

A total of 36 prospects will be looking to impress this weekend as part of the North Bay Battalion Orientation which takes over Memorial Gardens.

The Troops prospects will hit the ice for two intrasquad games that will take place on Saturday from 5 p.m. to 7 p.m. and then on Sunday morning from 9 a.m. to 11 a.m.

This will be the first opportunity for fans to see third overall pick Brandon Coe in action in a Battalion jersey.  Coe will wear #15 for Team White this weekend.

The Battalion camp will include a handful of local players as well. Battalion draft picks Payton Vescio, Ryan Mills, Matt Hardwick and Nick Davis will compete this weekend along with free agent invites Eric Mondoux and goaltender Drew Joyal.

Meantime, the NOJHL championship Powassan Voodoos, who are the Battalion affiliate team, are also represented as Rhys Brown, Tye Lindeman and Parker Bowman will also all be trying to impress this weekend.