Vipers edged the Hamilton Huskies in OT in the tournament final
Dec 3, 2019 1:00 PM By: BayToday Staff 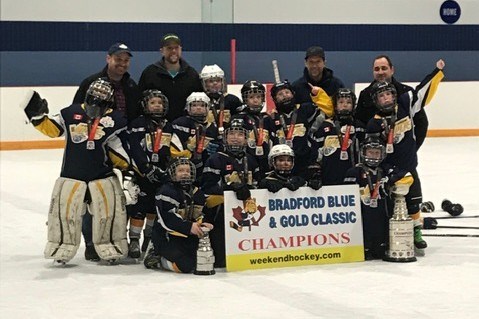 The East Nipissing Lucky 13 Atom 'A' Vipers won the gold medal at a Bradford Minor hockey tournament on the 17th of November, 2019.

The determined group of 12 players ranging from age 8, 9 and 10 years old went 2-0-1 during the round-robin portion of the tournament. In their first game, they defeated the Georgina Blades by a score of 4-1 led by their grit and team speed. In their second round-robin game, they defeated the Pickering Panthers by a score of 3-2 led by the hard work of their four solid defencemen.

In the third round-robin game, the Vipers met up with the Hamilton Bulldogs. Both teams battled to a 0-0 draw in which the Vipers steady goaltender Grayden Joseph kept the Bulldogs shooters off the scoresheet.

In the semi-final game, the Vipers clawed their way to a 2-1 overtime victory. In the finals the Vipers tangled with the Hamilton Huskies, the game was back and forth with big saves at both ends and solid defensive play at both ends.

The Vipers hard work and determination paid off again in overtime as the Vipers took the championship game 2-1 in overtime.

The Vipers took home the Bradford championship trophy which will be put on display at the East Ferris community centre.