'The kinds of things they did in the community appealed to me. They had a focus on children and youth'
Jan 6, 2021 1:00 PM By: Matt Sookram 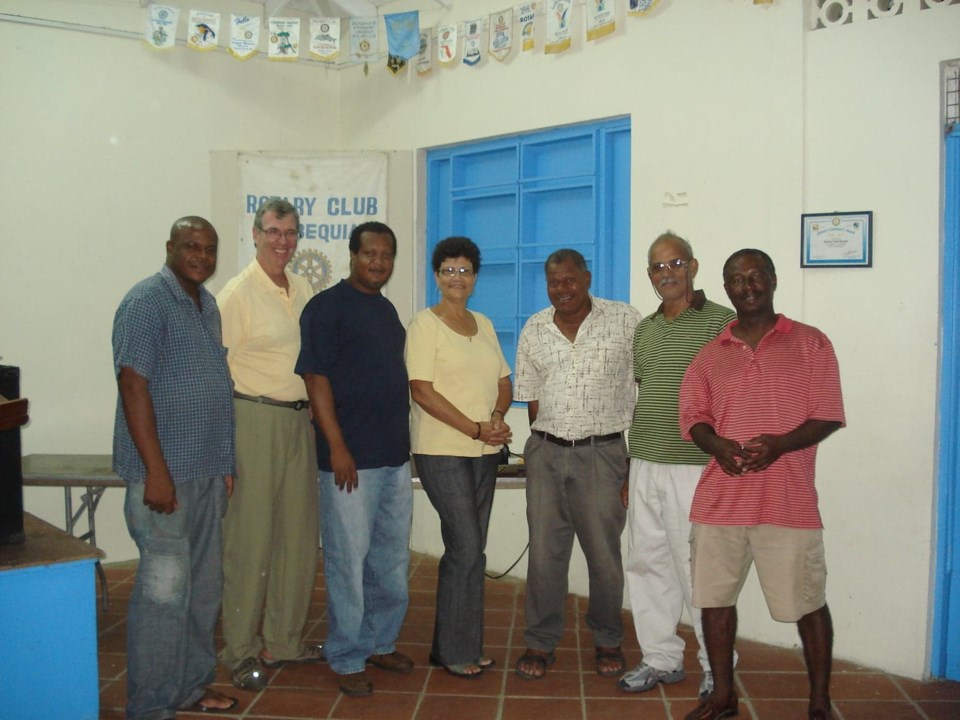 Colin Vickers at a meeting of the Rotary Club of Bequia. This is a small island in the Grenadine Islands (Caribbean).

“Rooted” is all about the people and places that make us proud to call our community home.

As an educator, Colin Vickers always had the best interest of his students at heart and it was thanks to the Rotary Scholar program that he was able to further his own education in that field.

“I was selected to be a rotary scholar in the late 1970s,” says Colin. “So I studied special education in Wales for a year and then I came back to work in Ontario and that experience helped quite a great deal in my career.”

His thoughtful and caring attitude didn’t end when the bell rang signaling the school day had come to a close. Vickers looked for opportunities outside the 9 to 5 commitment to make a difference in the lives of young people.

“In 1985 I was the Vice Principal of a school in Kingston and my boss said I should look into joining Rotary. Well, I already knew about the club because of prior experiences and so I joined that year in ‘85. I felt it was a good time to give back to my community and it was the perfect organization to do that with and 35 years later and through four different rotary clubs, I’m still with that group.”

Vickers eventually moved north and became the Director of Education in North Bay for four years before moving into semi-retirement, which allowed him to give more time to Rotary.

“Generally the process can be quite lengthy to join, even if you are transferring from one club to another and I came from the Prescott Rotary Club of Eastern Ontario, and this was a good fit for me and I took great pleasure in getting to know my community through Rotary,” says Vickers.

“The smaller club in North Bay appealed to me and it seemed to be a club that I could fit in with my work obligations, and the kinds of things they did in the community appealed to me. They had a focus on children and youth.”

There was a quick realization for Vickers that Rotary attracts people with varying skills who can put that to good use for the better of the community.

“You get to see different points of view because it had a wide range of people that are in the club. The people in Rotary brought their work experiences and different skill sets to the table and collectively they are stronger than something that would be put together with people that all came from the same type of job who might have a narrower view on things.

"We have a member who works for the Ontario Provincial Police, so now we have someone that understands that world and can relay information to us that would help us in organizing partnerships and relationships. Sometimes I saw needs at my work that service clubs and organizations could help with in terms of the gaps that existed for young people and so that also worked out well.”

Vickers says there have been many projects that he has been proud to be a part of including one they were able to proceed with during the COVID-19 pandemic.

“We have an alliance with the Rotary Club in Costa Rica in which we are supporting a children’s orphanage. We were able to put together a virtual garage sale in conjunction with a club in Orleans, Ontario and we raised $40,000 to send to the club in Costa Rica. They in turn donated that money to the orphanage which was losing funding as most of their money came from tourists,” says Vickers.

Working in the education sector also allowed Vickers to have some expertise when it comes to young people getting the most out of their own learning experience, and he served as District Chair for the Global Grant Scholarship Program and the Peace Fellowships.

Vickers says it was a wonderful experience to get to see young people earn an opportunity to study abroad.

“Katina Connolly, who is the Executive Director of the Capitol Centre, is a former recipient of this scholarship and she was able to study in London, England in the area of fundraising and philanthropy.  Katie Fettes who graduated from Widdifield and then off to U of T, studied in the area of conflict resolutions in London, England as well and ended up joining an international organization.

"So I feel really good about Rotary when it raises funds and spends its money on young people who are going to make a difference over time in this world.”

Another project that has taken up a lot of time and effort of Rotarians across the globe is the Polio Plus fundraiser, with the focus on eradicating Polio once and for all.

“That has been going since as long as I’ve been a Rotarian and it started in the 1980s,” says Vickers.

“As an organization, Rotary has been able to raise, with the support of other organizations, over $2-billion to help eradicate polio and we are hooked up with the Gates Foundation. Right now because of COVID-19 that has been put on hold of course, but interestingly enough, the work we do when we raise dollars here locally through our Polio Plus fundraiser, that money gets spent internationally in mostly underdeveloped nations where the need is the greatest. The protocols to set up Polio Plus are now going to be the examples for the delivery of vaccines for COVID-19. So the infrastructure that was required for the polio vaccination is now going to be applied to the distribution of the Covid vaccine. So it makes you feel good about that when your club can do a small fundraiser that has a big impact like that.”

Vickers says they also have many smaller projects on the go in between these big ones.

“We tend to fund smaller projects in the community, something where giving someone $1,500 is going to make all the difference in the world to them. It’s about putting someone over the top, or allowing them to have access to something they need.”

Vickers points to a partnership with Community Living as an example of that.

“We helped provide them with diapers and hygiene products. We’re also developing a program where we will work with seniors in need to develop what we call comfort packs. It’s a package of nice things that will be delivered in the winter when people are feeling a little glum.”

Vickers says, “It’s a good social, fun organization. We like being together. It gives you a chance to use your professional connections to do good for others and your community. It is great to hang out with these people who share a common interest in doing good work locally and beyond.”