CALGARY — His eight years of CFL experience helps, but Winnipeg Blue Bombers quarterback Zach Collaros is still in hurry-up mode settling into a new offence ahead of the Grey Cup.
Nov 20, 2019 6:38 PM By: Canadian Press 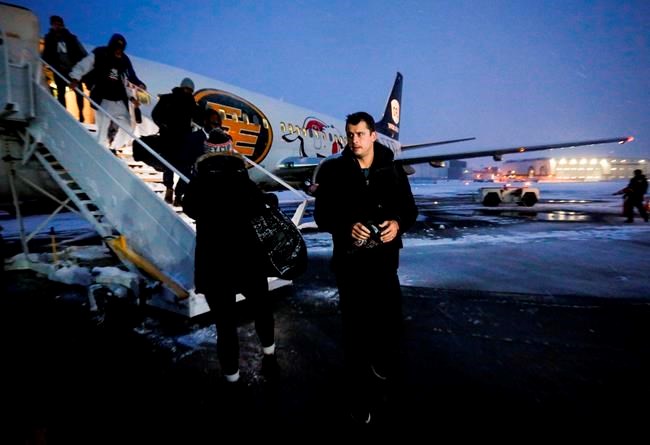 CALGARY — His eight years of CFL experience helps, but Winnipeg Blue Bombers quarterback Zach Collaros is still in hurry-up mode settling into a new offence ahead of the Grey Cup.

A Blue Bomber for just six weeks and about to start his fourth game for Winnipeg in the CFL's championship game Sunday in Calgary, Collaros has been doing his homework.

"It's gotten easier for me just being able to get in repetitions, being in meetings and working with the guys," Collaros said.

"There's still some things that don't register as quickly, but again I just have to keep repping, memorizing and learning.

"I'm kind of a visual learner. Had to write things down. Drawing up the plays and going through the reads that way has always helped me learn it.

"I've been in the league for awhile, been in different offences. A lot of it is very similar conceptually. It's just learning the new term for it. A lot of it is memorization."

The 31-year-old from Steubenville, Ohio, is riding a whirlwind 2019 season.

A Saskatchewan Roughrider to start the season, Collaros suffered a concussion on the first drive of the season-opener June 13 when he and former Hamilton Tiger-Cats teammate Simoni Lawrence banged helmets.

Collaros didn't play another down until Oct. 25. He was traded twice in the interim arriving in Winnipeg at the trade deadline Oct. 9 via the Toronto Argonauts.

"When we brought Zach in, we were looking for a veteran quarterback to come in and provide depth once we found out the severity of Matt's injury," Bombers general manager Kyle Walters said.

"When Zach became available, we knew he was a veteran guy who would pick up the system quicker than a young guy.

"We weren't sure if and how he fit in on the field, but we were confident with his ability that if he did get a chance he'd perform and we've seen that."

Streveler's foot injury in the penultimate game of the season thrust Collaros back into active duty. Collaros threw for 221 yards for two touchdown passes in a season-ending 29-28 win over Calgary.

"For me just getting the repetitions was great," Collaros said. "I hadn't taken a live rep since Week 1. I think I had a quarter and a half in the pre-season, so any time you can get out there when the bullets are flying, it's a good thing."

The CFL scheduling gods smiled on Collaros in giving Winnipeg a bye week to end the regular season.

"It didn't work out like that so it was perfect, making that trade and getting him a game under his belt and then a bye week to ease into the system."

Collaros hasn't given up an interception in his two playoff starts. He threw the only touchdown of the West final in a 20-13 win over the Saskatchewan Roughriders going 17-for-25 and 267 yards.

Collaros threw 11 passes for 193 yards, including a 71-yarder, and a touchdown in a 35-14 win over Calgary in the West semifinal.

He shared the ball that game with Streveler, who took 23 snaps but ran the ball instead of throwing it.

Collaros earned a Grey Cup ring as a rookie backup with the Toronto Argonauts in 2012, when Bombers head coach Mike O'Shea was the Argos special teams co-ordinator.

Collaros was Hamilton's starter in a 2014 Grey Cup loss to the Stampeders, so he brings that experience with him to Sunday's game in Calgary.

"Coach O'Shea has done a great job filling everybody in on the kind of chaotic nature of everything," Collaros said.

"There's more media you have to do. There's different expectations whereas in a normal week you're going to work, going home. It's a much easier thing to do.

"My message is just try to figure out a schedule. Coach O'Shea said the same thing 'don't procrastinate. Know what you have to get done and get it done.'"