VANCOUVER — Jordan Harvey could barely hide his smile when the conversation turned to the slick structure beyond the lush soccer pitch over his right shoulder.
Jun 14, 2017 10:23 PM By: Canadian Press 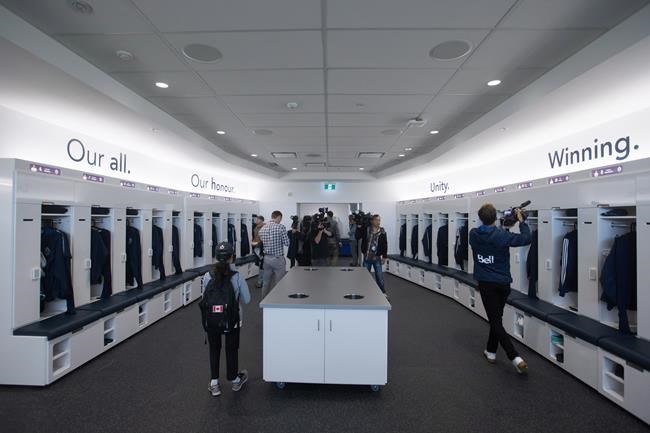 VANCOUVER — Jordan Harvey could barely hide his smile when the conversation turned to the slick structure beyond the lush soccer pitch over his right shoulder.

Carl Robinson, meanwhile, spoke of the hard work coupled with years of disappointment on the road to getting the facility built.

The Vancouver Whitecaps finally moved into their glistening new training centre at the University of British Columbia on Wednesday, more than a decade after the club first started plans for a permanent home.

"Words can't describe how meaningful this is to the players, to the staff, to the whole organization," Harvey said earlier this week. "It just raises the expectations, it raises the professionalism. I think you'll see higher quality because of it.

"You have everything you need ... there are no excuses."

A member of the Whitecaps since their first Major League Soccer season in 2011, Harvey is glad he's still around to see the project completed.

"I'm so looking forward to getting in there and getting started," the 33-year-old defender continued. "I'm proud, having been here from the very beginning and going through some of those growing pains that clubs do — to have withstood those and be here celebrating an organization that has put everything together."

It definitely took some time.

As part of the franchise's acceptance into MLS in 2009, the Whitecaps were required by the league to have their own practice facility. They had already been in talks with a couple of communities in Metro Vancouver for a few years by that point and had a deal in place with the city of Delta, B.C., that spring.

But that plan fell through before an agreement was eventually reached with UBC in 2012.

The provincial government provided $14.5 million in funding for the facility — dubbed the National Soccer Development Centre — while the Whitecaps contributed $15 million, and UBC donated land valued at $3 million for a total cost of $32.5 million.

"It's part of being a proper football club, having the proper facilities," said Robinson, Vancouver's head coach since late 2013. "When you look at trying to attract players they ask, 'What's the training ground like?'"

The three-story, 38,000 square foot fieldhouse includes a weight room that overlooks the grass training pitches, locker-rooms, a players' lounge, kitchen, a sports science wing, an area for UBC teams and a media workspace.

"It's top-notch," said Robinson. "I was fortunate enough to play in England for many years at Premier League and Championship clubs and a lot of them didn't have that."

There are three grass and two turf fields at the facility, while two other artificial surfaces have also been built as part of the project at Simon Fraser University in nearby Burnaby, B.C.

The Whitecaps' second-tier USL team will eventually also move into the building along with the club's youth residency program, meaning there will be as many as 140 soccer players under one roof, along with coaching and front office staffs.

Prior to moving into their new digs, the Whitecaps had a temporary setup attached to an arena on UBC's campus. Practices often took place at a field bordered by a running track used by university teams and members of the community at the same time.

Vancouver goalkeeper David Ousted joked he would also no longer have to avoid football players throwing weights around in the shared gym.

"It's huge in the development for the club to get these facilities," he said. "It lends a little bit of professionalism.

"You feel at home there. It's going to be huge for this team."