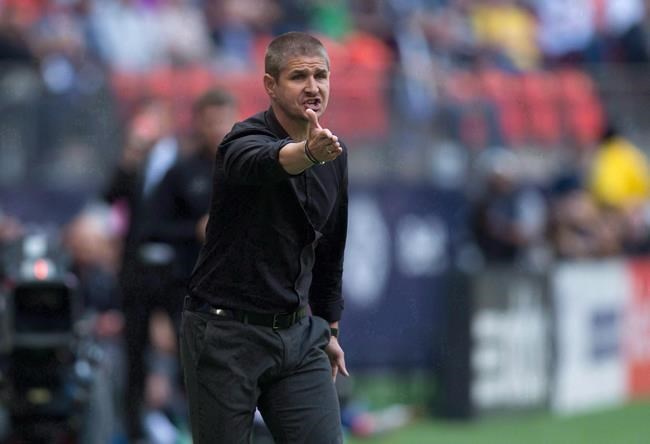 The head coach of the Vancouver Whitecaps tossed and turned while replaying a 3-0 road loss to the Seattle Sounders — a bitter setback to a fierce rival that snapped the club's impressive seven-game unbeaten run.

But after stewing for a while, all Robinson needed to flush the disappointment was remember how far his team has come.

"Not one person would have said we'd be top of the West with four games to go," said Robinson, whose Whitecaps missed the playoffs in 2016. "Make no bones about it, this group of players have done wonders."

Vancouver leads Major League Soccer's Western Conference by a razor-thin margin heading into Saturday's game at Sporting Kansas City, one of three clubs just a point back in the standings.

The Whitecaps can secure a playoff spot with a victory over Sporting, while a tie or a loss means they need other results to fall their way to clinch.

"We've put ourselves in a good position, but we've got to make sure we try and finish off the job."

That won't be easy this weekend or over the final stretch of the regular season, for that matter.

"I generally do believe they're the best team in the league," said Robinson. "Everyone's throwing comments out about who's the hottest team or who's the best team. K.C. are probably the most consistent team.

"You know what you get with them."

Kansas City has allowed just 23 goals all season — East-leading Toronto FC is next-best at 33 surrendered — with opponents having found the back of the net just 10 times at the intimidating Children's Mercy Park.

"It's a small stadium so you can feel all the fans there, and they're loud," said Whitecaps defender Tim Parker. "They rally behind their team for the whole 90 minutes."

Saturday will also be a contrast in styles, with Kansas City owning the second-best possession number in MLS at 55.7 per cent, while Vancouver has the lowest at 44.5, relying on quick counter-attacks and set pieces for the majority of its offence.

Kansas City, Seattle and the Portland Timbers are all just one point back of Vancouver atop the West with all four teams in action. Sporting have four games remaining after this weekend, the Whitecaps have three, while Sounders and Timbers have two each.

A number of Vancouver's players had poor showings in the Seattle loss that ended a 5-0-2 stretch, so changes are to be expected for the club's third game in eight days.

But Robinson will be forced into at least one switch after Tony Tchani was sent off in injury time for a foul that was initially a yellow card until the video assistant referee stepped in.

"I was disappointed that common sense wasn't used," said Robinson. "It wasn't a clear red card. It was one of those tweener ones.

Look for Aly Ghazal to step in for Tchani, while Andrew Jacobson will likely line up in the other defensive midfield spot in place of Russell Teibert. Jake Nerwinski should also return at right back for Sheanon Williams, who struggled mightily against the Sounders.

Robinson did confirm that goalkeeper Stefan Marinovic, who was singed in July, will make his third start for Vancouver as David Ousted gets a breather.

"It's all about how you stand up for the next game," said Ghazal. "(Kansas City) has a good team, but we're going there to get the three points."

"Clearly they're favourites," said Robinson. "We've got nothing to lose. No one will expect us to win there.