VANCOUVER — Head coach Carl Robinson didn't mince his words when asked what the Vancouver Whitecaps must do to win their game against New York City FC on Wednesday night at BC Place Stadium.
0
Jul 4, 2017 5:17 PM By: Canadian Press 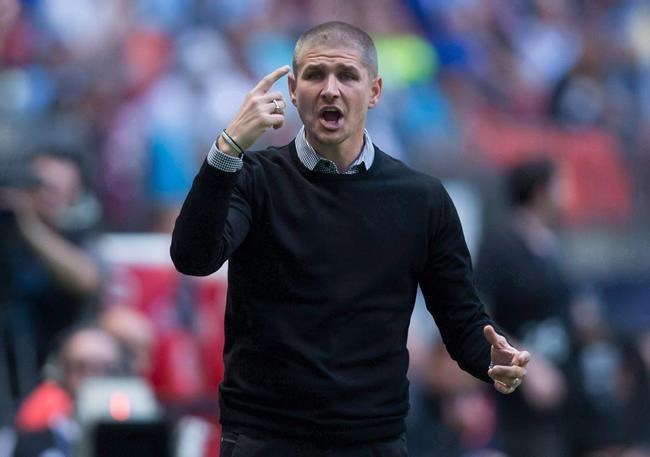 VANCOUVER — Head coach Carl Robinson didn't mince his words when asked what the Vancouver Whitecaps must do to win their game against New York City FC on Wednesday night at BC Place Stadium.

"We have to stop giving up silly goals, bad goals," Robinson said Tuesday after a team practice.

Vancouver is coming off a 4-0 road loss to the Chicago Fire on Saturday and have gone over 135 minutes without a goal. New York City FC comes to town as one of the hottest teams in Major League Soccer, having won four games in a row while outscoring their opponents 9-3.

Defender Jordan Harvey said the scoring drought hasn't been a drain on the Whitecaps' confidence.

"We have guys that can finish," said Harvey. "We need to create more opportunities, we need to get these guys in good spots to score goals. The last performance was a tough one."

Forward David Villa and midfielder Jack Harrison have helped make NYCFC one of the highest scoring teams in MLS. The veteran Villa has 11 goals this season, leaving him third overall in the league, while the 20-year-old Harrison has eight.

Their combined total is just two less than the 21 goals Vancouver has scored all season.

Robinson called Villa "arguably the best player in the league in that position." While respecting the native of Langreo, Spain, Robinson doesn't want his team to fear him.

"It's going to be a big test for us, we know that," he said. "But we've got players in key areas we believe can hurt them.

"We need to be switched on in the back and we need to focus on trying to take our chances when they do come along."

Robinson will have some decisions to make for his lineup.

Defender Sheanon Williams is available after an assault charge against him stemming from an alleged domestic incident was stayed. The 27-year-old from Boston was back practising with the team Tuesday.

"I apologize to the fans," he said. "I apologized to my teammates already.

"I'm just sorry I let them down. I will work to get their trust back."

Williams said the last two weeks "have definitely been difficult."

"When you get your job taken away from you, it definitely puts things in perspective," he said. "It's been tough, especially watching the guys go out and not being able to be at the games and helping my teammates."

Robinson said he might wait to play Waston when MLS resumes play following the break for the group stage of the upcoming CONCACAF Gold Cup.

New York is third in the Eastern Conference with a 10-5-3 record for 33 points. A win in Vancouver would set a franchise record of five consecutive wins.

New York is also 4-4-1 on the road this season and the third-year team has beaten Vancouver in their two previous meetings. New York coach Patrick Vieira said the Whitecaps will be looking to erase the memories of their loss to Chicago.

"They will want to bounce back, so we are expecting a really tough, difficult game," Vieira told NYCFC.com.

"We need to perform, to play with the right attitude. We need to have the same concentration and focus we've had in the last few games."

The Whitecaps have 21 points from a 6-7-3 record. They are seventh in the West and trail the L.A. Galaxy by one point in the race for the final playoff spot.

Vancouver's last goal came in a 2-2 draw with expansion Minnesota United, a game the Whitecaps led 2-0 at halftime. Overall the Whitecaps are 1-2-2 in their last five games.