TORONTO — Semyon Varlamov stopped 27 shots and the New York Islanders opened their best-of-five playoff series with a 2-1 win over the Florida Panthers on Saturday in the NHL’s return following a 4 1/2-month break.
Aug 1, 2020 7:53 PM By: Canadian Press 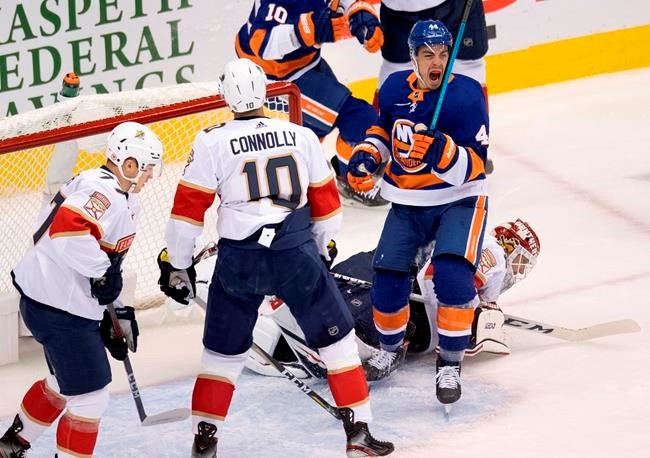 TORONTO — Semyon Varlamov stopped 27 shots and the New York Islanders opened their best-of-five playoff series with a 2-1 win over the Florida Panthers on Saturday in the NHL’s return following a 4 1/2-month break.

Anthony Beauvillier scored the decisive goal on a power play at 3:39 of the second period. The goal was scored a little over a minute after Florida's Mike Matheson was penalized for a hit to the head on Johnny Boychuk, who did not return.

Coach Barry Trotz didn't have an update on Boychuk following the game, but was pleased in how the Islanders not only stayed disciplined immediately following the hit, but also capitalized on the penalty.

“The best way to respond after a hit or whatever is a goal on the power play," Trotz said.

The Islanders entered the NHL's 24-team expanded playoff as the Eastern Conference's seventh seed, while the Panthers are 10th.

Florida’s Sergei Bobrovsky stopped 26 shots in his first start since Feb. 29. Bobrovsky missed the Panthers’ final four games due to injury before the NHL season was paused on March 12.

The Islanders beat Florida for the fifth straight time, dating to the 2018-19 regular season, and continued keeping the high-scoring Panthers in check.

“We did it the right way,” Beauvillier said. “A really quick pace. It was a tough game out there. The whole team was ready for it.”

Florida finished this coronavirus pandemic-shortened season ranked fourth in the NHL in averaging 3.3 goals per game, but has now managed just five goals in four games against the Islanders.

“We were kind of like one and done,” Barkov said. “That's how (the Islanders) are going to play, and we just need to figure out how to create more chances.”

The Panthers managed just four shots after Huberdeau scored. And their most sustained pressure occurred midway through the second period, when they controlled the play in the New York zone for about a minute.

The Islanders finally cleared the zone after Ryan Pulock blocked a shot, forcing a turnover.

The Panthers are suddenly in a familiar hole in their bid to win just the franchise's second playoff series, and first since reaching the 1996 Stanley Cup Final, which Florida lost in four games to Colorado.

The Panthers have not advanced beyond the first round in each of their past five playoff appearances since.

Varlamov shook off a late-season slump in which he went 0-2-2 and allowed 18 goals in five appearances, and earned his 14th career playoff win, and first since with Colorado in 2014.

Boychuk was hurt while crossing the Florida blue line after dumping the puck into the zone, when Matheson lowered his shoulder and caught the Islanders player directly in the head.

Boychuk lay face down on the ice before slowly getting up and headed directly to the locker room.

An officials’ review led to Matheson being issued a minor penalty for an illegal check.

The Islanders capitalized on the ensuing power play with Beauvillier one-timing in Devon Toews' pass into the right circle.

Huberdeau scored on an odd-man rush, in which he was allowed to cut in alone from the left wing and slip a shot under Varlamov.

NOTES: Panthers’ Joel Quenneville coached his 216th career playoff game, which ranks second on the all-time list. His 118 wins ranks third on the list, and remains five short of matching former Islanders coach Al Arbour, who ranks second. ... This is the second playoff meeting after the Islanders eliminated the Panthers in six games of a first-round series in 2016. Florida has four players left on its roster from that series, Huberdeau, Matheson, Aleksander Barkov and Aaron Ekblad, while the Isles have 10. ... The Islanders got the benefit of celebrating Pageau’s goal to the familiar home-arena sound of The Ramones’ “Blitzkrieg Bop.”