TORONTO — Vancouver defender Shannon Woeller, summoned by coach John Herdman as an injury replacement in April, has earned a callback for Canada's games against Costa Rica in Winnipeg and Toronto. The fifth-ranked Canadians play No.
0
May 31, 2017 1:13 PM By: Canadian Press 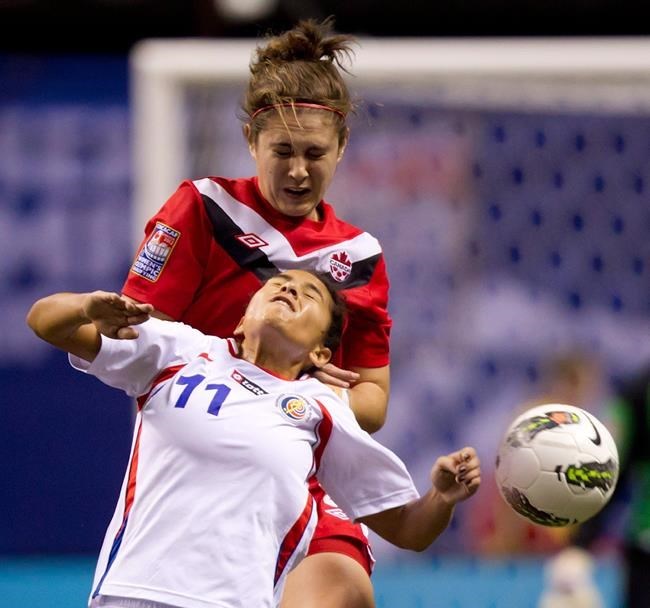 TORONTO — Vancouver defender Shannon Woeller, summoned by coach John Herdman as an injury replacement in April, has earned a callback for Canada's games against Costa Rica in Winnipeg and Toronto.

Woeller is part of a 19-woman roster that closely resembles the group Herdman took to Europe in April when Canada defeated No. 6 Sweden 1-0 and lost 2-1 to top-ranked Germany.

Teenagers Gabrielle Carle, Marie Levasseur, Sarah Stratigakis and Hannah Taylor were in the European squad but are not included for these home matches. Herdman says they will be busy with youth international competition.

Captain Christine Sinclair, who turns 34 the day after the Toronto game, leads a roster whose average age is 23.6.

Prior to winning her 17th cap in a her brief appearance off the bench against Germany, Woeller had not played for Canada since March 2012. But Herdman says he liked what he saw of the 27-year-old centre back, who plays club soccer for FF USV Jena in the German top-flight.

"Shannon's one of those good stories where we've asked her to go and let her career tell the story," said Herdman. "She was playing in Iceland, Norway, and now she's broken into the top level of German football and done well there with Jena, getting consistent game time, some good results and has a contract to go back there again."

Woeller was added to the squad in Germany, partly for convenience given the team was staying in her adopted home. But Herdman says she has earned her way back into the squad.

"It's a nice story and it's great to have Shannon back," he said.

Absent are veterans Diana Matheson and Erin McLeod, who have both undergone knee surgery. Matheson is still recovering while Herdman says he wants to give McLeod, who is back playing, more time on the field before calling her back in.

Canada, which is readying for CONCACAF World Cup qualifying play next year, is 10-0-0 all-time against Costa Rica. But the Central Americans, led by Shirley Cruz (Paris Saint-Germain) and Raquel Rodriguez (Sky Blue FC), are seen as a team on the rise in the region.

Herdman calls the games against Costa Rica a valuable chance to learn more about a tough opponent that they will likely meet in CONCACAF tournaments down the line.

Canada last played in Winnipeg in 2014, holding the U.S. to a 1-1 draw that featured a goal by Kadeisha Buchanan. Toronto last hosted the Canadians in June 2016 with the opening leg of a two-game pre-Olympic series with Brazil. Canada lost the Toronto match 2-0, rallying to win 1-0 in Ottawa three days later.

The Canadian Soccer Association will use the Toronto game to honour the recently retired Josee Belanger and Kaylyn Kyle.