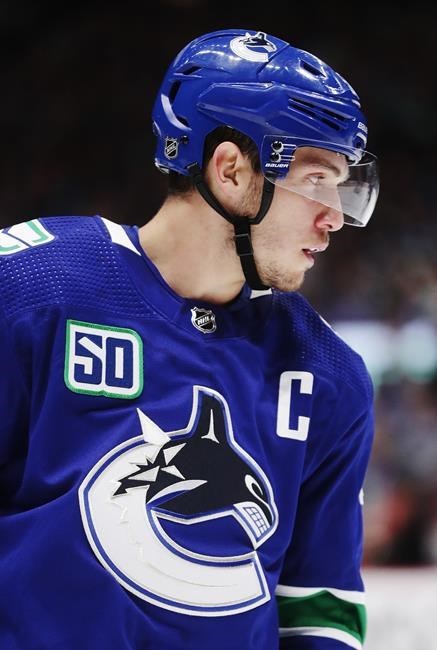 VANCOUVER — Bo Horvat has been trying to hide the news for weeks.

It's long been rumoured that the 24-year-old centre would be named the Vancouver Canucks new captain this season, but he worked desperately to maintain an air of mystery around the subject.

In reality, it's been weeks since the team told Horvat that he would, indeed, be handed the 'C.'

"I tried to keep it a secret the best I could. Everybody was trying to keep it a secret. It was probably the worst kept secret ever," Horvat said with a smile Wednesday night after the news was officially revealed in a special ceremony before the Canucks' home opener against the L.A. Kings.

Vancouver trounced L.A. 8-2 in the outing. Horvat registered an assist in the effort.

He becomes the 14th captain in the franchise's history.

The pre-game ceremony saw former captain Henrik Sedin hand his successor a jersey with a 'C' emblazoned over the heart. The sold-out crowd stood and cheered boisterously as the forward swapped out his threads.

"It was pretty surreal. I was actually pretty emotional," Horvat said. "Obviously it was pretty humbling and a dream come true. Never in a million years did I think I'd be in this position. I couldn't ask for a better group of guys in here."

Having Sedin — who retired at the end of the 2017-18 season with his twin brother Daniel — on hand made the moment even more memorable.

"To have Hank and Danny there and to have Hank give it to me, that was another special thing because he was such a huge part of my first four years and learning what it's like to be a captain and how to be a pro," Horvat said. "It was the icing on the cake, having him out there handing it to me and passing it off."

The London, Ont., native said he learned a lot about leadership while playing with the Sedin twins, including the importance of leading by example and making sure guys are comfortable approaching him about anything.

"They were just complete pros on and off the ice. Definitely learned a lot from them," he said.

With the Sedin's retirement still fresh last season, the Canucks went without a traditional captain, opting instead to rotate the 'A' among a core of leaders, including Horvat.

Drafted 9th overall by Vancouver in 2013, the forward had been a regular fixture in the team's lineup since the 2014-15 season.

Horvat has long shown something a little special, Sedin said before Wednesday's game.

"Most of the young guys who come in, they're good hockey players, they want to score or they want to play well," the former captain said. "But then there's some guys who have that extra dimension to them. They see more of a big picture and you can see that they think differently than most guys. And he's been one of them, for sure."

The young centre will have to have the guts to be honest with media about how the team's really playing, Sedin said.

But his advice for Horvat was simple.

"Be yourself. He got picked because he is who he is," Sedin said. "They know him and he doesn't have to change."

The Canucks ownership, management and coaching staff see Horvat as being the team's leader as they enter an exciting new era, said coach Travis Green.

"He represents the team well, cares about his teammates, leads in his own way and will continue to lead. And probably learn how to lead in certain situations. There's a first time for everything, but we have full faith that he's going to be a great captain," he said.

"We want a team that's going to win a Stanley Cup. And I think having a captain that's been there for awhile will help you at that time."

This report by The Canadian Press was first published Oct. 10, 2019.