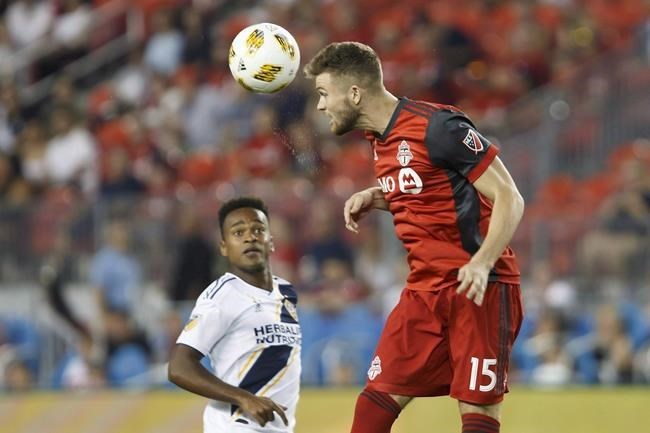 Eriq Zavaleta hit the trifecta in donning El Salvador colours for the first time during the recent international break.

The 28-year-old Toronto FC centre back started all four of El Salvador's World Cup qualifying games, scored against Antigua and Barbuda, and was handed the captain's armband when skipper Marvin Monterroza came off.

Zavaleta played in first-round wins over the U.S. Virgin Islands (7-0) and Antigua and Barbuda (3-0) before helping El Salvador reach the final round of CONCACAF qualifying with a 6-0 aggregate victory over St. Kitts and Nevis in the second-round playoff.

"It was a wonderful experience. Everything I could have asked for," he said from Orlando, where Toronto is training ahead of Wednesday's MLS match in Nashville.

"I feel a ton of confidence coming out of there," he added. "I believe in myself. More than anything it was some real minutes in some meaningful games. And good experiences. Minutes have been somewhat hard to come by for me over the past 24 months. I knew that I had a real opportunity to go there and get minutes and that's exactly what I did."

The Indiana-born Zavaleta qualifies for El Salvador through his father Carlos, who was born there and represented the Central American country at the youth level.

His father moved to the U.S. with his family when he was 18, playing at UCLA and then professionally for the Los Angeles Skyhawks and California Sunshine in the American Soccer League and Phoenix Inferno of the Major Indoor Soccer League before taking up coaching. He now runs the Indiana Soccer Academy.

Eriq was previously part of U.S. Soccer's under-17 residency program and played in the 2009 U-17 World Cup. He was also part of the American under-20 team pool.

Zavaleta, who had been in contact with several El Salvador coaches in the past, decided early last year to pursue switching his international allegiance. He started on the necessary paperwork and got his passport in time for the June international window, allowing coach Hugo Perez to call him up.

Zavaleta, who worked on his Spanish prior to flying south, said both team and fans welcomed him with open arms.

"They accepted me right away," he said. "Not only that, I was voted second captain on the team (which) showed me a ton of respect and admiration that I have felt little before in my career. So that was something that was a big deal for me and something that was I was very grateful for."

There were some 10,000 fans in the stands for Zavaleta's home debut June 8 at Estadio Cuscatlan in San Salvador. They saw him open the scoring in the 40th minute.

"I got a little glimpse into what it'll be like for these next ones (in September)," he said. "The fans are incredibly passionate about the team. It was pouring rain and they still were there strong and loud and filled the streets and around our buses."

Zavaleta was wearing the captain's armband when the final whistle was blown a week later in the 2-0 home win over St. Kitts and Nevis, officially marking El Salvador's return to the final round of CONCACAF World Cup qualifying for the first time in 12 years.

"So that's a moment I'll never forget and something that I'll cherish."

He says the current El Salvador team, ranked 69th in the world, is young but talented.

"I think Hugo Perez has a ton of very good ideas of the way that we want to play. And I think we showed over four games that we can be dangerous and we can be good with the ball. We weren't challenged a ton defensively and there's some things that we, of course, have to get better at and clean up with real challenges ahead."

That will include facing off against TFC teammates with No. 70 Canada and former teammates in the U.S. youth system.

"It will be special to play against not only Canada but the United States, to play against them in meaningful games. I know how incredibly talented and what a special group Canada has now. I think they're similar in that they've got a lot of young talent without a ton of CONCACAF experience. It'll be fun to watch them from afar but also be fun to play against them. It's something I'm looking forward to. And hopefully that game against Canada when we play there is in BMO (Field) because that will be even more special."

Canada and Panama joined El Salvador in surviving the first two World Cup qualifying rounds in the region that covers North and Central America. They will now compete in the so-called Octagonal round-robin alongside Mexico, the U.S.., Jamaica, Costa Rica and Honduras, who received byes to the final round.

Zavaleta is on El Salvador's preliminary roster for the July Gold Cup and say he has started talks with TFC "to determine what the next course of action is."

Zavaleta is in his seventh season with Toronto. He has made 140 appearances in all competitions, eighth on the club list and just two games behind former Italian star striker Sebastian Giovinco.

But with Chris Mavinga and Omar Gonzalez as the first-choice centre-back pairing, he has played just 381 minutes over the last two seasons with seven league appearances (including four starts).

This report by The Canadian Press was first published June 21, 2021