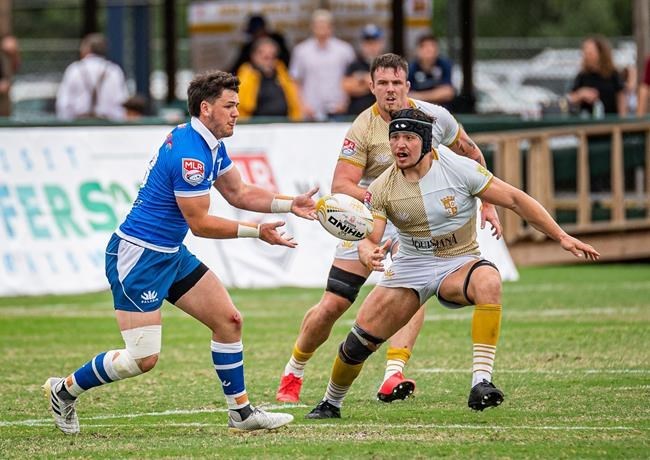 MARIETTA, Ga. — A pair of late penalties by Damian Stevens lifted NOLA Gold to an 18-12 win over the Toronto Arrows in Major League rugby play Saturday.

The loss mathematically eliminated Toronto (4-9-0) from playoff contention with three matches remaining. The Arrows have lost four in a row and six of the last seven.

Tied 12-12, NOLA took advantage of a Toronto penalty for a high tackle to kick into the Arrows end. The New Orleans team won the ensuing lineup and set up a driving maul that produced another Arrows penalty for pulling the maul down.

That allowed Stevens, a Namibian international, to kick the winning penalty in the 75th minute. He added another in the 80th minute.

Adding to the Toronto woes, Arrows back Spencer Jones was injured in the final minutes when his ankle seemed to catch in the artificial turf in the rain at Lupo Family Field at Life University.

Jones, named to Canada's touring squad for test matches against Wales and England next month, was helped off with his lower left leg in a splint. He had returned to action in mid-April after a knee injury in June 2019.

Toronto has set up shop in suburban Atlanta during the pandemic, sharing facilities with Rugby ATL.

The Arrows matchday 23 included 17 Canadians, including 11 in the starting 15. The squad featured 13 internationals: eight from Canada, three from Uruguay and two from Argentina.

With props Cole Keith and Tyler Rowland returning from injury, 38-year-old Rob Brouwer made his season debut with new signings Alex Janlin, a French prop who holds Canadian citizenship, and Ronan Foley, a former Ireland under-20 flanker, starting on the Arrows bench.

Canadians Eric Howard and Lockie Kratz came off the NOLA bench in the second half.

Both teams had issues on offence in a scrappy first half that started in rainy conditions.

Dominguez opened the scoring in the 18th minute for NOLA with a slashing solo run down the left wing that saw him beat three tacklers. Yungert's conversion attempt bounced off the post. Domínguez favoured his shoulder after touching the ball down but kept going.

Toronto responded with LeSage blocking Hanno Dirksen's attempted kick clearance from inside the 22-metre line and then getting to the ball first to touch it down near the posts in the 27th minute for a converted try and 7-5 lead.

As always, Arrows flanker Lucas Rumball was a force at the breakdown. The Toronto co-captain came into the game leading the league in breakdown steals with 20.

The rain returned in the second half, further complicating the handling.

NOLA regained the lead in the 52nd minute when Dolan broke away from a driving maul to touch down. The play started with a Toronto scrum penalty, allowing NOLA to kick to the corner for the attacking lineout.

Toronto tied it up at 12-12 in the 63rd minute when Mieres touched down a well-weighted grubber kick from fly half Will Kelly. Jones missed the conversion from out wide.

NOLA came close to a try minutes later but flanker Andrew Guerra was penalized for a double-movement as he tried to get the ball over the goal-line.

NOLA has won all four career meetings with Toronto, including a 22-14 victory earlier this season.

After next week's game against Rugby United New York, Toronto could lose more than a dozen players to international duty with matches against Old Glory DC and the New England Free Jacks remaining in early July. Nine Arrows will be joining 23rd-ranked Canada for the games at No. 6 Wales and No. 3 England.