TORONTO — Matthew Tkachuk's teammates on the Calgary Flames would like him to cut out the needless suspensions, but don't want any change in his gritty, high-skilled game.
Dec 7, 2017 7:50 PM By: Canadian Press 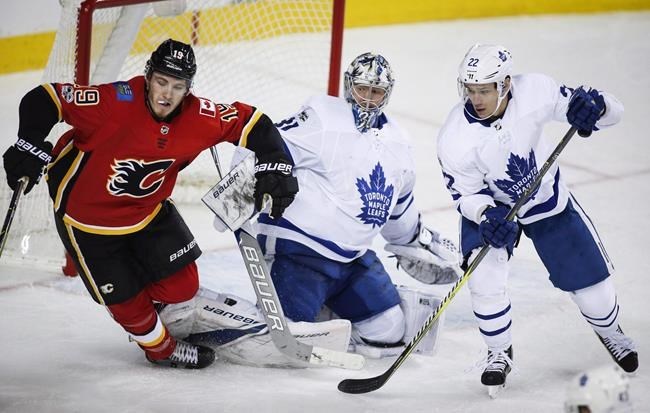 TORONTO — Matthew Tkachuk's teammates on the Calgary Flames would like him to cut out the needless suspensions, but don't want any change in his gritty, high-skilled game.

Tkachuk was suspended one game by the NHL for a spearing incident in Wednesday's game against Toronto. It was the 19-year-old's second one-game suspension this season.

"He has to play on the edge," Flames captain Mark Giordano said before Tuesday night's game against the Montreal Canadiens. "He's a great player.

"He plays on the line. I don't think any of his hits and stuff on the ice are questionable. Maybe its on us older guys to help him a bit with some of the borderline stuff from the bench. But there wasn't much there, to be honest."

He acknowledged that spearing from the bench crossed the line.

"I think anyone would want to have that one back," said Giordano. "He's not a dirty player at all on the ice. He plays on the edge and obviously it's tough to miss this game. I know he really wanted to be in this one."

"I apologize to everybody involved." said Tkachuk.

The incident came in the first period of Calgary's 2-1 shootout loss to the Maple Leafs. Tkachuk poked Leafs forward Matt Martin with the blade of his stick while standing on the bench as an altercation was brewing along the side boards.

The play began when Martin came across the ice and checked Troy Brouwer into the boards, leading to a brief scrum.

Tkachuk's jab went undetected by on-ice officials and no penalty was called on the play.

"That's just the way Chucky plays," said forward Curtis Lazar. "He always straddles that line and sometimes he goes over it, but that's why we love to have him on our team.

"He's a competitor. He hates to lose and he'll do whatever it takes to win. You respect the league's decision and all that, but for us as a team we have to come together and fill that void."

Martin said he didn't know Tkachuk speared him until he was shown a video of the play by team staff.

"I didn't feel it at the time but I guess if he's going to do stuff like that he should make it count," said Martin.

"He'll learn over time," Babcock said of the 19-year-old player. "You've got to give Tkachuk credit, he played a good game, he played hard. No reason for that stuff."

Tkachuk is only two weeks removed from a one-game suspension for unsportsmanlike conduct stemming from an incident in a Nov. 15 meeting with the Detroit Red Wings.

Late in the third period of an 8-2 loss against Detroit, Tkachuk jabbed Wings forward Luke Witkowski with the blade of his stick after Witkowski was escorted off the ice following a fight with Calgary's Brett Kulak. Unlike the Martin incident, Tkachuk was given a five-minute major for spearing and a game misconduct on the play.

"You can play with an edge, for sure. I think he's an effective player. I think he's a good player," said Martin. "When you're sitting on the bench or the situation in Detroit ... it's not really necessary ... I don't think it's a good hockey play by any means"

— Files from Bill Beacon in Montreal