OKLAHOMA CITY — Russell Westbrook is staying with the Thunder. The superstar point guard and reigning NBA MVP has signed a contract extension to remain in Oklahoma City, the team announced Friday.
0
Sep 29, 2017 6:34 PM By: Canadian Press 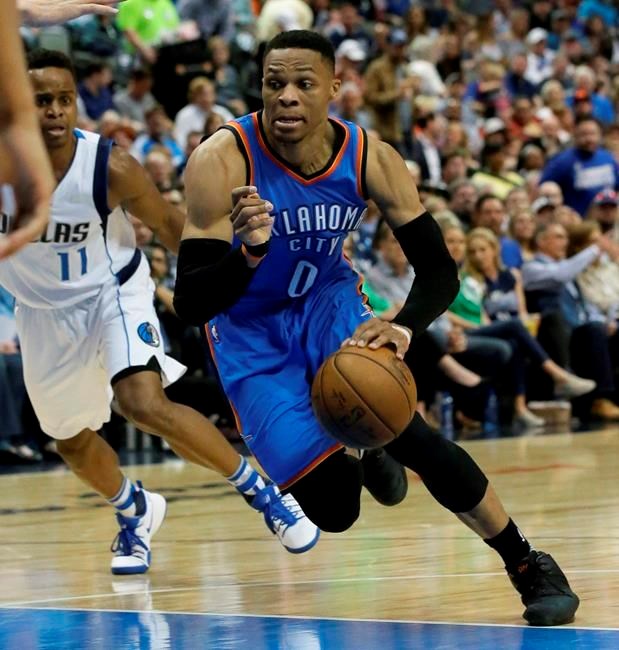 OKLAHOMA CITY — Russell Westbrook is staying with the Thunder.

The superstar point guard and reigning NBA MVP has signed a contract extension to remain in Oklahoma City, the team announced Friday. ESPN first reported the agreement and said it would be for five years and worth $205 million.

Westbrook made an Instagram post Friday afternoon, a photo of him yelling at Chesapeake Energy Arena with his arms raised in the air. His words of choice to go with the photo are the words he lives by and the name of his charitable foundation: "WHY NOT??"

Westbrook said this week that Oklahoma City is where he wanted to be. He said he was thrilled with the additions of four-time All-Star Paul George and 10-time All-Star Carmelo Anthony. Both have player options on their deals after this season.

"I love being here," he said. "I'm excited about the season. Obviously, with a lot of new changes, and I'm excited."

Thunder owner Clay Bennett values Westbrook's importance to Oklahoma City on and off the court.

"We recognize and deeply appreciate Russell's rare and unique abilities as he leads the Oklahoma City Thunder, but also understand his presence and impact on our community will be felt for decades to come," Bennett said. "On behalf of the entire Thunder organization, our ownership group and all of Oklahoma, I want to express my deepest appreciation to Russell, and I know that the very best days for the Thunder are yet to come."

Westbrook averaged a triple-double last season and was the league scoring champion. He averaged 31.6 points, 10.7 rebounds and 10.4 assists and broke Oscar Robertson's single-season record for triple-doubles with 42.

His success increased anxiety for Thunder fans who feared he might leave, as Kevin Durant did during the summer of 2016 when he chose to join the Golden State Warriors. Westbrook signed the extension on Durant's 29th birthday.

Westbrook said he hadn't signed because of other obligations.

"I've been at home," he said. "I've been . Just trying to get my family together, honestly. You know, having a new son can be a little difficult, you know what I mean? I've been trying to help my wife, help my family and enjoying and embracing that moment as much as I can because I know during the season, I'm going to be and moving around."

Enes Kanter, who Oklahoma City sent to New York in the deal that brought Anthony to the Thunder, said he thought Westbrook would agree to the extension.

"I mean, that's his legacy," Kanter said. "That's his team, and he's not going to leave his legacy behind."

Thunder general manager Sam Presti made his second major deal in a week after adding Anthony. This piece laid the groundwork for the future.

"Russell's commitment to the Thunder organization since its inception in 2008 has helped propel us to great heights and stare down great challenges over our first decade," Presti said. "We are extremely fortunate to have an athlete, competitor and person such as Russell wear the Thunder uniform."

Now, Westbrook can focus on making this season special.

"We've got to figure out the best way for everybody to play and for our team to play," he said Monday. "That part is easy in my opinion. Just being able to go out, and you have one goal, and that is win a championship. Guys will do what needs to be done to win a championship."