The Latest: Mayweather finishes off McGregor in 10th 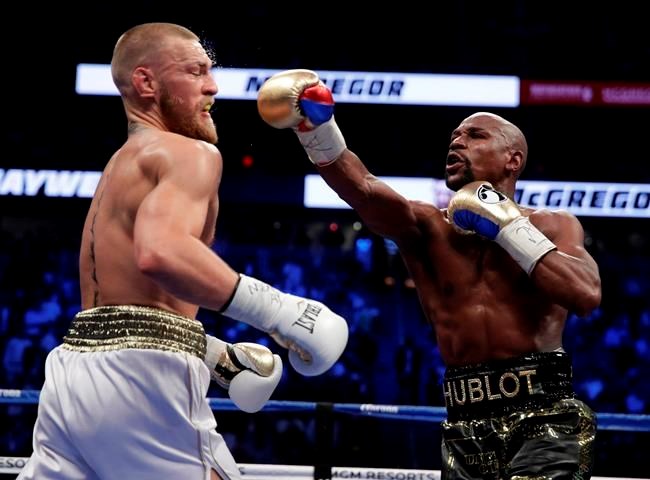 Floyd Mayweather Jr. stopped UFC champion Conor McGregor on his feet in the 10th round Saturday night, ending the boxing spectacle of the summer with a harsh dose of reality.

The most unusual megafight in years went longer and was more competitive than many expected when an unbeaten, five-division world champion boxer took on a mixed martial artist making his pro boxing debut.

While McGregor (0-1) had the T-Mobile Arena crowd behind his improbable quest, Mayweather (50-0) survived a rough beginning and gradually took control. He brutalized McGregor in the 10th, landing numerous shots and chasing McGregor around the ring until referee Robert Byrd saved the Irishman and stopped the fight.

Round 9: Floyd Mayweather Jr. has no fear of Conor McGregor's punches and he lands big combinations to the head that shake McGregor. A tired McGregor holds on trying to stay upright as Mayweather batters him around the ring.

Round 8: Action slows some but the tone of the fight remains the same. Conor McGregor is fighting in flurries, back-pedaling as Floyd Mayweather Jr. keeps after him.

Round 7: Floyd Mayweather Jr. is starting to have his way with Conor McGregor, chasing after him and landing punches to the head. McGregor appears to be tiring as Mayweather keeps the pressure on.

Round 6: Floyd Mayweather steps up the pace and begins landing in volume. He batters Conor McGregor with a series of punches and lands some good lead right hands. McGregor's punches seem to lack snap.

Round 5: Floyd Mayweather Jr. continues to pursue Conor McGregor who tries to keep him off with little flurries. But Mayweather seems to be figuring something out and lands a hard left in the final minute.

Round 4: Floyd Mayweather is pursuing Conor McGregor, who keeps him away with his jab.

But Mayweather begins to connect for the first time in the fight, landing some solid head punches.

Round 3: Conor McGregor continues to use his jab and size to keep Floyd Mayweather Jr. off balance.

Mayweather is searching for openings but not finding them. McGregor switches from southpaw to conventional to try and fool Mayweather.

Round 2: Conor McGregor is fighting a good tactical fight, using his reach to control the action.

Neither fighter lands much in the round but McGregor pulls off another one as Floyd Mayweather remains tentative.

Conor McGregor came right out to the middle of the ring to meet Mayweather and landed a good uppercut in the first round.

He kept Mayweather away with pawing right jab.

Conor McGregor made his ring walk with an Irish flag draped over his shoulders. He pumped his fists in the air to the crowd, which cheered loudly.

McGregor's handlers held aloft his UFC title belts after he got into the ring for his first pro boxing match.

Floyd Mayweather Jr., meanwhile got a bit theatrical, wearing what looks like a ski mask under an oversized hat. He was greeted with a mixture of cheers and boos.

The odds at fight time Mayweather by about a 5-1 margin.

Gervonta Davis stopped previously unbeaten Francisco Fonseca in the top fight on the undercard of Conor McGregor's challenge of Floyd Mayweather Jr., but left the ring without his 130-pound title.

Davis missed weight by 2 pounds Friday, and was stripped of his title. He apologized to fans in the ring after the fight, which ended with a punch to the back of the head at 29 seconds of the eighth round.

Davis, a Mayweather protege, ran his record to 19-0 while Fonseca lost for the first time in 20 fights.

In another bout, Badou Jack stopped Nathan Cleverly in the fifth round of their light heavyweight title fight.

Conor McGregor will have to wait a bit longer to challenge Floyd Mayweather Jr.

The start of the fight has been delayed while Showtime PPV consults with various TV systems around the country and tries to resolve some transmission issues.

That's according to a Showtime spokesman, who said the fight would be delayed "a little bit."

There have been reports on social media of problems with the transmission of the telecast. Fans complained UFC's Fight Pass, which was streaming the fight, has locked up or is impossible to get into.

Mayweather's fight with Manny Pacquiao in 2015 was also delayed because of heavy demand on cable and satellite systems.

Conor McGregor was calm and confident in his televised pre-fight interview, telling Showtime's Jim Gray that he would "paint a beautiful picture" in his fight against heavily Floyd Mayweather.

McGregor was subdued in the interview, and he was still wearing a dress shirt, tie and vest, even though his hands were already wrapped about an hour before the start of the bout.

"I'm going to go out and be myself — free, spontaneous, creative — and paint a beautiful picture," he said. "I see me truly outclassing this man and putting him to sleep."

McGregor said he thought he weighed "about 170" pounds after rehydrating from Friday's weigh-in, where he was 153. Mayweather weighed in at 149 .

Conor McGregor and Floyd Mayweather Jr. have arrived at the T-Mobile Arena on the Las Vegas Strip for their much-hyped 154-pound fight.

McGregor came sporting a shorter haircut than he had in the days leading up to the fight, with his girlfriend behind him pushing their 3-month-old baby in a stroller.

Mayweather is guaranteed $100 million for his night's work, and could make double that if the pay-per-view buys are strong as expected. McGregor's guarantee with the Nevada State Athletic Commission is $30 million.

There are two more fights on the undercard before the main event begins. There will also be two national anthems, with the U.S. version sung by Demi Lovato and the Irish anthem by Imelda May.

The T-Mobile Arena is still virtually empty for what is expected to be a late-arriving crowd. Promoters had nearly 2,000 tickets still to sell on fight day at prices ranging from $2,500 to $10,000.

Irish fans filled the arena the day before for the weigh-in, when McGregor weighed 153 pounds and Mayweather 149 .

Bookies had faced taking a big loss because McGregor tickets outnumbered Mayweather tickets by as much as 18-1 at some books. But the big bets started coming in Thursday on Mayweather and at the William Hill chain of sports books 74 of the money on straight bets was on Mayweather.

There were a handful of million-dollar bets on Mayweather, with three coming in just hours before the fight. The biggest reported bet on McGregor is $100,000.

Bookmakers say they still will post a big loss should McGregor beat Mayweather, especially if he stops him early. If Mayweather wins, though, it will be a big score by the sports books.

Mayweather was minus 600 at William Hill, down from 11-1 when the fight was announced.

The fight is shaping up to be the biggest bet fight ever, breaking the mark of about $50 million set in Mayweather's win over Manny Pacquiao in 2015.