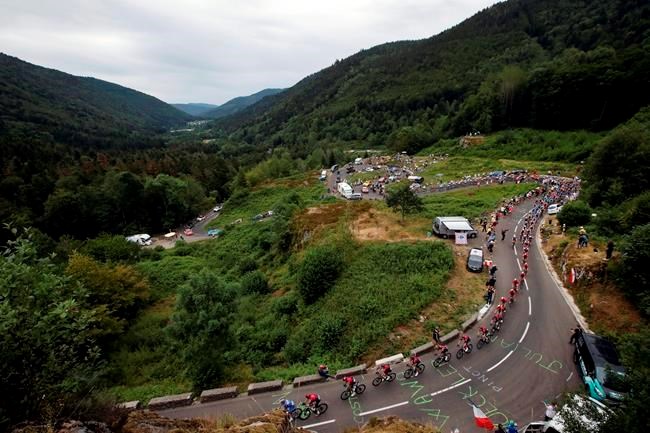 Geraint Thomas, the defending champion, also rode strongly, going some way to answer questions about his fitness after he crashed out of the Tour de Suisse in June. Thomas rode in fourth at the top of the terrible climb to the Planche des Belles Filles ski station in the woody Vosges mountains of eastern France.

But the severity of the ascent, with a final 24 per cent incline and an unpaved section that kicked up clouds of dust, torpedoed other main contenders for overall victory in Paris on July 28. Some riders were so exhausted at the top that race workers had to help them stay upright on their bikes after they crossed the line.

One of the big losers of the day was French rider Romain Bardet, a podium finisher in 2016 and 2017, who cracked and rode in one minute nine seconds after Thomas. He suffered the added indignity of having his chain jump on the line, immobilizing him. Now 2:08 behind Thomas overall, Bardet will be hard-pressed to make up that deficit on even harder climbs to come in the Alps and Pyrenees.

Vincenzo Nibali, the 2014 Tour champion from Italy who also won the stage to La Planche des Belles Filles that year, came undone this time. He lost 51 seconds to Thomas on the climb and is well down the overall rankings in 20th place, 1:07 behind Thomas.

Ottawa's Michael Woods climbed back into the top 10, sitting ninth after a 16th-place finish in Stage 5. Hugo Houle of Sainte-Perpetue, Que., was 90th in Stage 5 and 113rd overall.

Teuns and Ciccone, both racing their first Tour, were rewarded for their enterprise and endurance on the climb and for having been part of a breakaway of 14 riders that sped away from the pack early in the 160. trek from Mulhouse that took the Tour up six climbs before hitting the last and hardest one.

At the top of that final ascent, Teuns and Ciccone were the two survivors of their breakaway group, fighting head-to-head for the win.

Ciccone cracked first on the eye-poppingly steep incline, as Teuns cranked on ahead of him to the line.

"It was really hard. A man-to-man fight," Teuns said. "I finished it off. It was amazing."

But Ciccone got a delightful consolation prize, in the shape of the yellow jersey.

"It's an incredible day. I can't grasp what's happening," the Italian said.

Having raced in the Giro d'Italia in May, where he won a stage, the 24-year-old came to the Tour to bank some experience. The yellow jersey was never in his plans.

"It's strange but super good," he said.

The last three riders to hold the yellow jersey at the top of the Planche des Belles Filles all went on to win in Paris: Bradley Wiggins in 2012; Nibali in 2014; Chris Froome in 2017.

But Ciccone doesn't expect to follow in their footsteps. His Trek-Segafredo team is built around Australian rider Richie Porte, who also got dropped by Thomas but limited the damage, riding in just nine seconds after the Welshman.

Another sign that Thomas isn't hampered by his crash in June was that he also finished ahead of Egan Bernal, his teammate at Ineos who could yet become one of his main challengers for the Tour title.

"It was a decent day," Thomas said.

The previous wearer of the iconic yellow jersey, French rider Julian Alaphilippe, did everything he could to keep it, battling up the ascent, through the dust.