MONTREAL — The Montreal Impact have shown they can still compete without star player Ignacio Piatti, and they'll need to keep that up for at least two more games.
0
Apr 19, 2019 12:00 PM By: Canadian Press 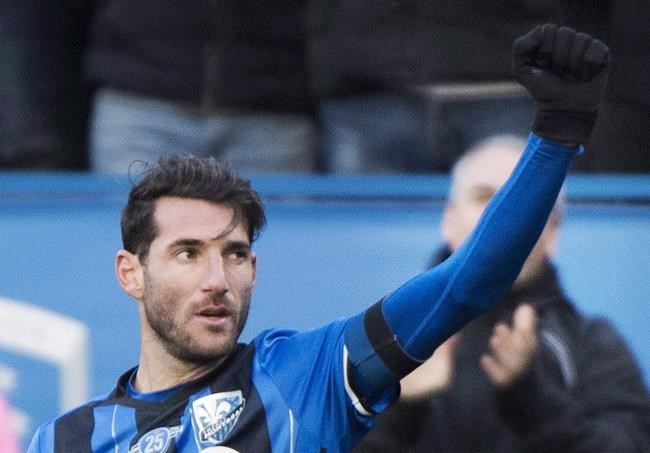 MONTREAL — The Montreal Impact have shown they can still compete without star player Ignacio Piatti, and they'll need to keep that up for at least two more games.

Piatti will not be in the lineup Saturday afternoon when the Impact (3-2-2) visit the Philadelphia Union (3-3-1). The midfielder will also miss Wednesday's game in New England as he recovers from a right knee injury.

The 34-year-old Argentine has missed Montreal's last four games. The Impact have gone 1-1-2 in his absence, proving they can still earn points without him. They have not conceded a goal in their last three matches.

"We're very aware of the perception of this team, what we are to other teams in the league," defender Dan Lovitz said before training Friday. "To see us showing up there without Nacho, I'm sure their tails are going to be up a little bit and they're going to be excited to play and think we're going to be a lesser version of ourselves.

"It's important for us to play with our chest out and guys to show what they're about. The last few games are a great testament to that."

Piatti has been a dominant figure in Montreal's midfield since joining Major League Soccer in 2014. The designated player has led the Impact in goals for the last three seasons.

Since 2016, Piatti has scored more than one third of Montreal's total goals (34 per cent). He has three goals in three games this season.

Without Piatti, the offence has dried up. Remi Garde's men have only scored twice in their last four games.

Saphir Taider netted one in a crushing 7-1 defeat in Kansas City on Mar. 30. The Impact then notched back-to-back 0-0 draws against New York City FC and D.C. United. And Harry Novillo scored the lone goal in a 1-0 victory over Columbus in last week's home opener.

Newly added striker Maximiliano Urruti has yet to find the back of the net this season, though he leads his side with three assists. Piatti's absence likely means Novillo and Orji Okwonkwo will start on Urruti's wings.

The struggles on offence come as Montreal is playing some of its best defensive soccer. Evan Bush is tied for second among goalkeepers with three clean sheets.

"I'm happy if we keep clean sheets every game or win 1-0 every game," said central defender Jukka Raitala. "That's all you need. Strong teams defend very well. Confidence is high when you defend as a team. If we defend like this, and the opponent doesn't score, there's a very good chance we can win the game."

To remedy the lack of scoring, the Impact signed Panamanian forward Omar Browne this week, on loan from Panama's Independiente de La Chorrera. The 24-year-old is the nephew of former Impact player Roberto Brown.

However, Montreal will have to wait before Browne makes his debut as his paperwork is not yet in order.

"He looks like a great player with a fantastic left foot," Raitala said of Browne. "He can for sure bring more to the team on the attacking side. We can't wait for him to play for us. He seems fit. He can score goals, he can be creative. That's something we need, for sure."

Philadelphia is coming off a 2-0 loss to the Los Angeles Galaxy following three consecutive victories. The Union will be missing designated player Marco Fabian (injury) and centre back Auston Trusty (suspension).

The Union are a fast team that like to play on the wings and can score on quick transitions. Philadelphia's strikers Fafa Picault and David Accam will put the Montreal backline to the test.

"We know they have a lot of really talented attacking players," said Lovitz, a Pennsylvania native. "It's not one dominant attacking talent putting in all the offensive plays. They share the ball very well, they play a systemic game, and they have a lot of guys that can hurt you if you're not paying attention."

SHUTOUT STREAK: Evan Bush and the Impact have not conceded a goal in 276 minutes of play, the fourth-longest shutout streak in club history. Montreal went 420 minutes without conceding a goal last season.

ON THE ROAD AGAIN: Montreal is back on the road for a pair of games. The Impact opened the 2019 campaign with six straight road games before last Saturday's home opener. The Impact are 2-2-2 on the road this year.

SECOND-HALF THREAT: Philadelphia has scored seven of its nine goals this year in the second half, with four of those coming shortly after halftime.

TRIUMPH IN PHILLY: The Impact are unbeaten in their last five games in Philadelphia (2-0-3). Montreal's last loss at Talen Energy Stadium was a 2-1 decision on Aug. 9, 2014.

LAST TIME OUT: The Impact's last trip to Philadelphia at the end of last season resulted in a 4-1 victory for the visitors. Piatti had two assists.