NEW ORLEANS — The Toronto Raptors tried to balance celebrating an impressive performance by Pascal Siakam and concern over injuries to two of their top players.
Nov 9, 2019 12:53 AM By: Canadian Press 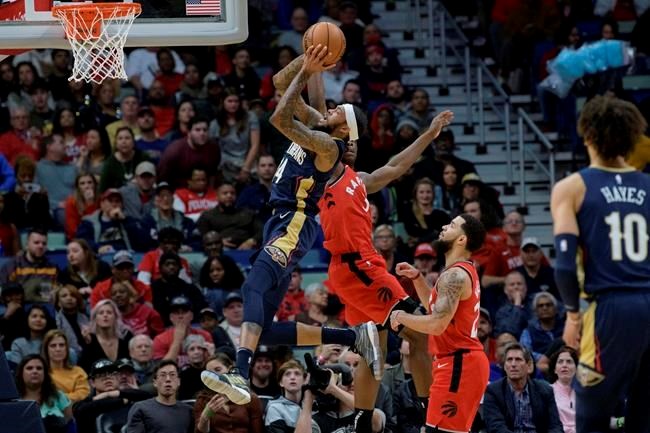 NEW ORLEANS — The Toronto Raptors tried to balance celebrating an impressive performance by Pascal Siakam and concern over injuries to two of their top players.

Siakam matched a career high with 44 points in the Raptors' 122-104 win over the New Orleans Pelicans on Friday night.

Lowry suffered a fractured left thumb and Ibaka has a severely sprained ankle. That means the defending NBA Champions will likely be depleted — at least in the immediate future.

But, Siakam showed again Friday he can lead the Raptors to victories as his 44 points matched the career high from a game against the Washington Wizards on Feb. 13. The NBA's Most Improved Player last season scored 16 in the first quarter Friday, and finished 17 of 28 from the floor. He also had 10 rebounds.

Siakam attempted a career-high 10 3-pointers, making five. The confident deep shooting is just another sign of his continued growth.

"He's got the green light to make any move he wants at this point," Raptors coach Nick Nurse said. "No, I'm serious man. We're just trying to get him to see how far he can go here. Drive it, post it, shoot the three, drive it in transition, play pick and roll; we want him to get as many reps as he can."

The 6-foot-9 Siakam briefly ran the Toronto to start the fourth quarter with Lowry out and Fred VanVleet resting. Siakam said a rare opportunity to play point guard was an opportunity to work on his ball-handling and overall game.

"I'm just trying to continue to improve, continue to get better and just do what I do— just be myself," he said.

Toronto used a 45-point second quarter to take control of the game and improved to 6-2. The Pelicans slipped to 1-7.

The Pelicans kept pace early and the first quarter ended in a 30-30 tie. But the Raptors scored the first 15 points of the second quarter. Toronto parlayed the hot start into a 45-point quarter and a 75-53 halftime lead.

Even with Finals MVP Kawhi Leonard leaving in free agency, the Raptors have so far looked like a legitimate contender in the Eastern Conference, and Siakam's continued emergence is a key reason for Toronto's impressive start.

"He's evolving into a superstar," Lowry said of Siakam.

Lowry said he suffered his thumb injury in the first quarter when he tried to swipe the ball away from Pelicans Derrick on an offensive rebound.

Lowry said Friday's injury is unrelated to the surgery he had in July to repair ligaments in the same thumb.

Lowry went to the bench after the initial injury, but he returned a couple minutes later. He even made two 3-pointers in the second quarter before subbing out midway through the quarter and retreating to the locker room.

Ibaka, who was in a walking boot after the game, suffered his ankle sprain when he contested an Ingram layup with about 1 minute remaining in the second quarter. Ibaka lay on the floor, writhing in pain as play continued, before a Toronto foul allowed two teammates to help him limp off the floor.

Pelicans coach Alvin Gentry bemoaned his team's again after the game. Through eight games, New Orleans has allowed a 40-point quarter and a 70-point half three times.

"Those are hard to survive in this league," Gentry said. "That's where they got the separation, and then once again you're playing uphill the rest of the game and it doesn't matter what kind of run you make."

New Orleans entered Friday allowing a league-worst 124.3 points per game, and after another ugly defensive performance, he hinted there could soon be lineup changes.

"The people we have out there, if they can't do what we're expecting them to do, then the next thing for us to do is that we've got to try to find somebody else," he said.

Pelicans: New Orleans shot a season-worst 40.4% from the field. ... Guard Frank Jackson scored 13 points off the bench. Rookie and Toronto native Nickel Alexander-Walker added 13 points. ... Starting point guard Lonzo Ball did not play in the fourth quarter after a rough night that included four turnovers, a season-low two assists and 2-of-8 shooting (5 points).