D.J. Smith noticed something when his Ottawa Senators arrived in northern California last month. There weren't many people around. "At that point, no one knew what we know now," the team's rookie head coach recalled Wednesday.
Apr 8, 2020 5:27 PM By: Canadian Press 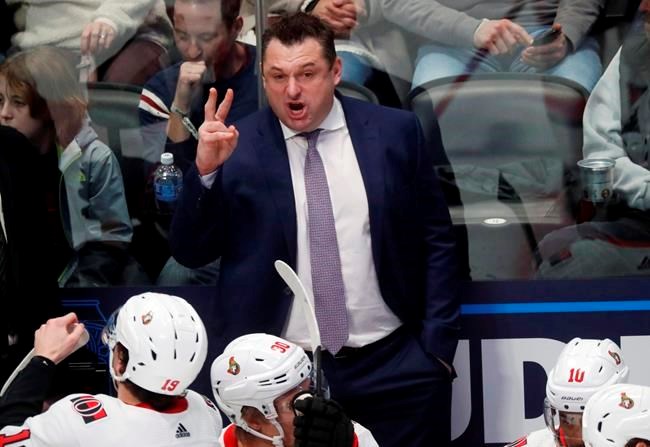 There weren't many people around.

"At that point, no one knew what we know now," the team's rookie head coach recalled Wednesday. "The fear hadn't set in."

That fear, of course, is over the COVID-19 pandemic that's swept the globe, leaving both personal and economic hardship in its wake.

Six members of the Senators' organization, including five players, would eventually test positive, making the team the NHL's epicentre for the disease.

At the beginning of March, however, there were still a lot unknowns.

Sure, officials in Santa Clara County, where the San Jose Sharks play, had advised against holding large public gatherings, but three game went ahead anyway at the SAP Center — one was against Ottawa — before the NHL suspended its season March 12.

"In San Jose it was kind of weird," Smith said on a video conference call with reporters. "Guys were aware, but there (was) no way of telling that it would have got to this level, certainly for us anyways."

The Senators played March 7 against the Sharks, then had two days off before a back-to-back against the Anaheim Ducks and Los Angeles Kings further south.

"Everyone in Anaheim and L.A. was living life as normal," Smith said. "You saw the odd person with a mask on.

"But the world as we know it today was nowhere near (the same) back then."

There's also no way of knowing for sure exactly when the Senators in question contracted the novel coronavirus, but they played at the Staples Center against the Kings on March 11, some 24 hours after the NBA's Brooklyn Nets — who had four players test positive for COVID-19 — suited up at the same venue against the Los Angeles Lakers.

The Colorado Avalanche, who had three players test positive to bring the total number of NHLers to eight, faced off in San Jose on the March 8 and in L.A. on March 9.

The Senators announced last week that everyone affected in the organization had recovered, while the team's radio colour commentator, Gord Wilson, revealed March 27 his test also came back positive.

NHL staff and players have been advised by the league to self-isolate since March 13, a directive that's been extended through April 15 and is likely to be pushed back even further.

"The good thing is that everyone that had it didn't have horrible symptoms," Smith said of his players. "Being athletes, they all got through it and they're all on the other side of it now."

As for hockey, Smith was asked if he'd had time to reflect on his first 71 games behind the bench as an NHL head coach. Ottawa is in the midst of a full rebuild after tearing its roster down to the studs, but has promising young talent led by Brady Tkachuk and Thomas Chabot, and should have two picks at the top of this year's draft — whenever that takes place.

"You always want to be better," said Smith, who's back home in Tecumseh, Ont., with his wife and two kids. "I'm proud of how hard our team played. We were physical. We didn't back down to anyone. We worked.

"The culture changed. Guys realize to be an Ottawa Senator it involves work ethic, it involves being team-first."

Smith added that whenever his players return to the ice, whether it's to close out this season or ahead of the 2020-21 campaign, it will be time to move forward after putting up the league's 30th-best record at 25-34-12.

"Our mentality has to change," he said. "When you watch the best teams in the league ... the Washington Capitals, the Boston Bruins, they expect to win every night.

"I've talked to some of the young guys that are going to be leaders in the future. There will be a point where we've got to take a step. We want it to be sooner (rather) than later, but it starts in your own mind."

What could turn out to be Smith's final game of 2019-20 was also the last game before the NHL pressed pause — and a surreal experience.

"Guys were aware that an NBA player tested positive," Smith said. "There were some questions whether we were going to play. We listened to President Trump on TV that night. There certainly was a different atmosphere than any other game I've been a part of.

"Once the NBA cancelled their games, we knew that we wouldn't be far behind."

He also had no idea how much the world — both for himself and his team with all the positive tests — would be changed in short order amid the pandemic.

"I realize way more today how much more serious it is the way it's spreading, the way it's hitting, " Smith said. "This disease doesn't spare anyone.

"It doesn't matter — actors and actresses, rich, poor — you've got to make sure that you stay safe."

This report by The Canadian Press was first published April 8, 2020.