VANCOUVER — When the Vancouver Canucks hired Travis Green as their new head coach this spring, a video of his fight with Dan Cloutier from their playing days was widely circulating online.
Jun 2, 2017 4:27 PM By: Canadian Press 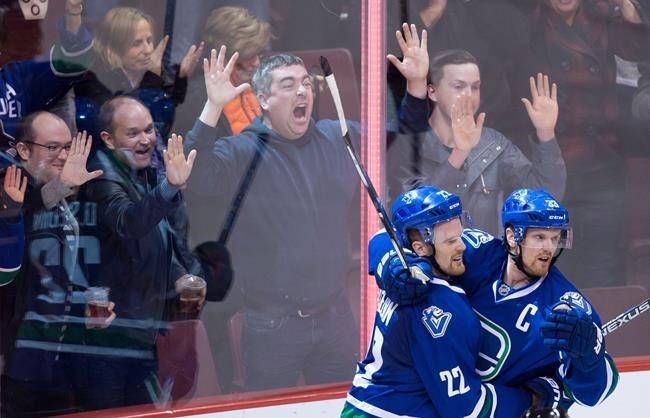 VANCOUVER — When the Vancouver Canucks hired Travis Green as their new head coach this spring, a video of his fight with Dan Cloutier from their playing days was widely circulating online.

Henrik Sedin took part in that 2003 game against the Boston Bruins, but also needed a refresher of the altercation sparked by former Canucks winger Todd Bertuzzi cross-checking Green into Cloutier, then Vancouver's netminder, to set off a melee in the crease.

"I've seen that clip," Sedin said with a smile.

Cloutier was promoted to the position of Canucks' goalie coach last season and remains on the staff after Green replaced the fired Willie Desjardins.

While he never had any on-ice run ins with man who will be calling out his number this season, Sedin remembers going up against Green during his first six years in the NHL.

"At that time he was more of a checking forward, but he was a guy that had some skill as well," said the Vancouver captain. "It's pretty neat to play a few years against him way back.

"Talking to him, his brand of hockey seems very exciting and something that I think will fit us."

Henrik and Daniel Sedin picked up honorary degrees for their charity work and community involvement from Kwantlen Polytechnic University in Surrey, B.C., this week, but the conversation with reporters afterwards quickly turned to their future with the rebuilding Canucks.

The talented twins, who will be 37 and heading into the final year of their contracts when the puck drops this fall, are coming off their worst statistical performances since taking over as the team's undisputed leaders in the mid-2000s.

Henrik had just 51 points last season, while Daniel came in at a paltry 44 for an offensively challenged team that finished 28th and 29th the last two years, and is unlikely to contend any time soon as it looks to infuse even more youth into the lineup.

But with their prospects of winning in Vancouver perhaps never looking more bleak, the Sedins are still committed to the only franchise they've ever known — at least outwardly — and continue to maintain they want to retire as Canucks.

"We've always said we want to win here," said Henrik Sedin, who added the pair started their off-season training at the beginning of May. "That's our focus. Beyond that, have a better year than we had last year and then we'll see what happens."

Have they pondered they pondered a scenario where Canucks are out of the playoff picture at the trade deadline? Would the Swedish forwards waive their no-trade clauses to move to a contender and help Vancouver acquire valuable assets?

"That's a long way from now," said Daniel Sedin. "It's June right now and our only focus is to be ready for training camp. We haven't really looked too far ahead.

"That's dangerous if you look too far ahead."

The subject of their role with the club as it continues to transition to a younger core has also been a source of debate, especially with centre Bo Horvat becoming the first player not named Sedin to lead the Canucks in scoring since 2006.

The twins, who are heading into their 17th NHL season, have said repeatedly they welcome the challenge for their minutes, but only if it's deserved.

And that won't change under Green, who will be a rookie on the job after four seasons with the Canucks' AHL affiliate.

"We're not asking for anything," said Henrik Sedin. "Training camp is when you show up and you show everyone what you can do and how you can help the team.

"Just because we've played for a long time doesn't mean we're expecting anything. For us, it's just come in and be at our best and then he can use us however he likes."