Raonic through to third round at French Open, Abanda defeated by Wozniacki 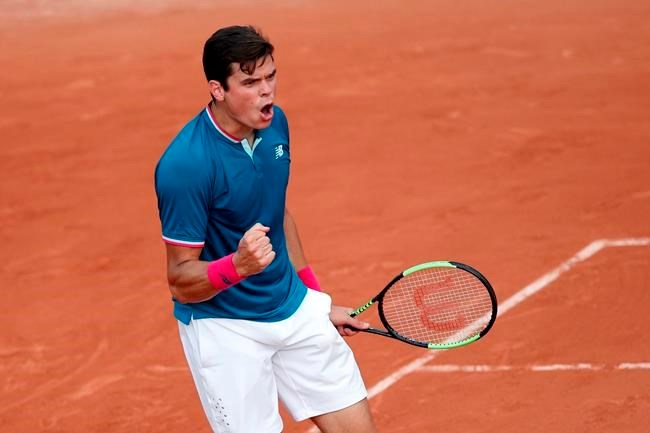 PARIS — Canada's Milos Raonic is through to the third round of the French Open after a 4-6, 6-2, 6-3, 6-4 win over Brazil's Rogerio Dutra Silva on Wednesday.

Raonic fired his 25th ace of the day on match point to set up a third-round meeting with Spain's Guillermo Garcia-Lopez.

The two hour 23 minute match could have been decided quicker had Raonic been more successful on break chances. The fifth seed from Thornhill, Ont., won just five of 20 break points.

After dropping a first set where he was broken twice, Raonic controlled the next two before running into some trouble in the fourth.

Raonic and Dutra Silva held serve until the ninth game, where the Brazilian faced triple break point. But Raonic couldn't put the Brazilian away until his seventh break point, throwing his racket to the ground at one point.

Raonic was 1-for-7 on break points in the fourth set.

Still, Raonic went into game 10 up 5-4 and emphatically put the match away with his booming serve, winning every point with an ace.

Raonic has won both his career meetings with Garcia-Lopez: a Davis Cup win in 2013 and a victory at Miami in 2014, both on hardcourt.

In women's action, Montreal's Francoise Abanda was bounced from the second round after losing 6-0, 6-0 to 11th-seeded Caroline Wozniacki of Denmark.

Abanda, playing in her first French Open, was broken six times on eight chances by the former world No. 1.