Karen Paquin has given up her job twice for her country. The flanker from Quebec City hopes to make that sacrifice pay off this month in Ireland where Canada, runner-up three years ago in France, looks to win the Women's Rugby World Cup.
Aug 1, 2017 12:43 PM By: Canadian Press 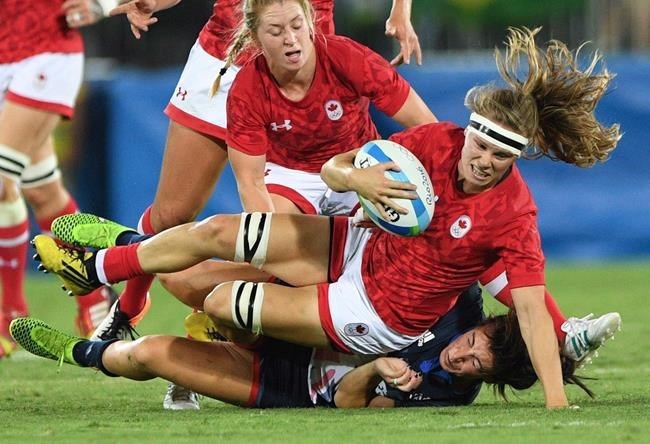 Karen Paquin has given up her job twice for her country.

The flanker from Quebec City hopes to make that sacrifice pay off this month in Ireland where Canada, runner-up three years ago in France, looks to win the Women's Rugby World Cup.

The Canadian women, currently ranked third in the world, open Aug. 9 against No. 23 Hong Kong in Dublin.

Paquin, who turns 30 on Thursday, left her job as a chemical engineer and her family some five years ago to come west and try out for the national sevens team. Then, after helping Canada to a bronze medal at last summer's Rio Olympics, she gave up her carded status with the sevens squad to rejoin the 15s team.

Unlike the men's 15s squad and both the men's and women's sevens sides, the women's 15s team is not officially centralized and receive no carding money, although some players get some financial help from their provinces.

"For me, probably the most difficult part of this year was to step away from that very organized and very supported group that the sevens program is," said Paquin, Canada's female sevens player of the year in 2015. "And move into the world of not getting any money and looking for my training myself.

"It took me a little time to adapt to that new situation, but at the same time I was so lucky to have my husband support me, to help with the finances and everything ... We managed to find a new comfort zone out of it, I would say.

"But that's the main challenge of the 15s program — that we have to manage the whole financial thing at the same time that we are being elite athletes."

Playing for this Canadian side clearly comes at a cost.

Paquin has been one of the lucky ones, receiving in July a $5,000 bursary from Team Investors Group Amateur Athletes Fund.

"Oh my God I was so happy when I received the message. it couldn't come at a better time ... I'm so happy and humble to be selected because I know there were a ton of athletes who applied," she said

Paquin's hope is that if her team succeeds, it will help pave the way for the next generation of rugby players. She believes a long line of women have been passing the rugby torch in Canada to improve conditions.

Also to showcase the sport.

"Because it's such a good sport. It's aggressive, it's fast. It's a sport that Canadian fans would love if only they had access to it."

Prior to last summer, the women used to have to help pay the costs of camps and tours. Rugby Canada set up the Monty Heald Fund — named after the late former Rugby Canada president — to help end that practice through donations.

"That's been a huge win for us," said Paquin, who credits Rugby Canada CEO Allen Vansen for trying to create a level playing field for the women.

The money is needed. World Rugby covers travel and accommodation at the World Cup but not for the preparation.

Paquin, who started in the 2014 World Cup final when Canada was beaten 21-9 by England, says the team enters this tournament with a feeling of unfinished business.

"I'm very excited. We have a good group of athletes for this World Cup and at the same we know that it's a whole new journey, it's not just the extension of that World Cup. We have to start it all over with Game No. 1. That presence in the final in 2014 doesn't guarantee us anything this time."

"I think we have something that could bring the World Cup home," she added.

"We have a mentality of playing for each other and it shows on the field, it shows off the field. We're very very close-knit, we have group chats that go on for the whole year with the whole team on it — even though we're a little bit scattered across Canada, we're very connected."

And she says she was committed to coming back for the next World Cup "whatever road I was going to be on."

A flanker blessed with speed, Paquin sees a lot of the field and plays a key role in breaking up opposition attacks and keeping those of her own team going.

"I love the position," she said with enthusiasm, "because you can do everything."

She has no plans to leave rugby just yet, saying she will likely look to return to sevens for next year's Rugby World Cup Sevens in San Francisco.