MONTREAL — The Montreal Impact poured in four goals and got the win, but not without some hairy moments at the end against a young Vancouver Whitecaps lineup.
May 30, 2017 11:22 PM By: Canadian Press 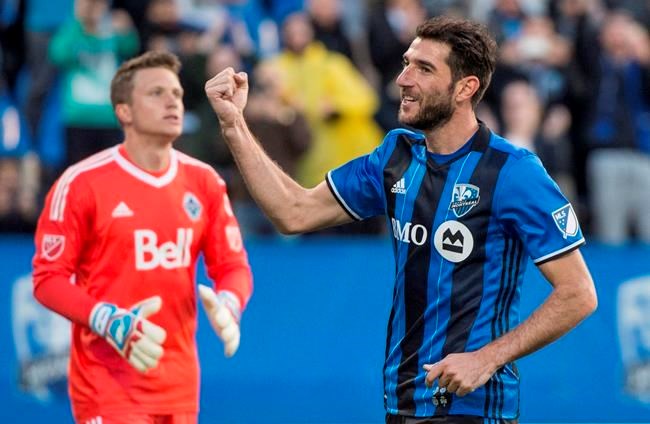 MONTREAL — The Montreal Impact poured in four goals and got the win, but not without some hairy moments at the end against a young Vancouver Whitecaps lineup.

Ignacio Piatti scored twice from the penalty spot and Blerim Dzemaili got his first goal for the Impact in a 4-2 victory that clinched the two-legged Canadian Championship semifinal by a 5-4 aggregate score on Tuesday night.

But a goal in the 77th minute from Kyle Greig left the Whitecaps only one goal short of victory via the away goals rule, and Impact defender Ambroise Oyongo preserved the win by heading a ball away from the goal-line with Vancouver pressing in added time.

"We did what we had to do — we won the game," Montreal coach Mauro Biello said. "We had an excellent first half.

"In the end, games like that are difficult because the other team is pushing hard and has nothing to lose."

The Whitecaps won the first leg 2-1 at home last week, but the well-rested Impact were expected to win at home against an opponent playing its fourth game in 11 days. Vancouver coach Carl Robinson left nine starters back home and dressed a young, mostly inexperienced squad.

They nearly stole an early goal as Nicolas Mezquida shot over the bar from close range in the opening minute, but the Impact took control with three goals before the intermission before a roaring announced crowd of 15,213 at Saputo Stadium.

"I thought we played very well the first 20 minutes," said Robinson. "We missed a good chance in the first minute.

"I thought we had to score, but then they had two penalty decisions. At halftime I said to them it's easy to go under but let's not go under. Let's show how good we can be. Let's have a good second half, and we did. We kept fighting, which was positive for these young players because a lot of them haven't played too many games."

The Impact advanced to next month's final against the winner between Toronto FC and the Ottawa Fury, who complete their semifinal on Wednesday night. Alphonso Davies, who scored in the first leg, had Vancouver's other goal.

The Canadian championship is known to produce some wild, unpredictable results as many players who don't get a lot of minutes in Major League Soccer get a chance to show what they can do.

But Biello took no chances in the return leg, putting top attackers Piatti and Dzemaili as well as midfield veteran Marco Donadel into his lineup.

"It's a cup game so the emotions are high," said Montreal captain Patrice Bernier. "They came back and scored and all the way to the end it was only one goal, but it was nice to have a solid performance.

"This means a lot. We went to the Champions League final (in 2015). We know what this leads to. You see what it means to both teams. We hope to get another Canadian Championship and show that we're the best in Canada."

Montreal struck first when Dzemaili sent Jackson-Hamel through and the striker was taken down while trying to go around goalkeeper Spencer Richey in the 20th minute. Piatti scored from the  spot with a low shot to the left side.

Eight minutes later, Piatti made good with a shot to the right side on a penalty after he was fouled.

Dzemaili jumped on a loose ball in the 38th after Ambroise Oyongo went across into the box and thumped in his first goal since joining the Impact from Italian club Bologna three weeks ago.

Davies was sent on to start the second half and it paid off when the 16-year-old phenom fought off Bernier in the Montreal area, spun around and drilled a low shot past Maxime Crepeau in the 59th minute.

But only two minutes later, Bernier got the better of two defenders to flip a pass that Jake Nerwinski couldn't quite head away. It fell to Jackson for a shot just under the bar.

Richey made the save of the game when Dominic Oduro set up Jackson-Hamel alone in front and a moment later, the Whitecaps closed the gap to one when Greig got his head on a loft into the box from substitute Cristian Techera.

"Even though at the half we were down two goals we knew that if we got one that would shift the momentum a bit," said Greig."Once we got the second one it made it a very interesting last 15 minutes of the game. If we had another couple of minutes we might have got one."

Unless Toronto wins the Voyageurs Cup, the winner will face TFC in a one-game playoff on Aug. 9 to determine Canada's entry in the 2918 CONCACAF Champions League. The playoff was needed because rules were changed to put the Canadian entry directly into Phase 2 of the champions league next March so TFC, which won last year, did not get a chance to compete in the 2017-18 competition.

The Whitecaps began this season in CONCACAF play, beating the New York Red Bulls in a quarter-final before falling to Tigres of Mexico.

Both teams are back to league action on Saturday, with Montreal playing host to the Red Bulls and Vancouver receiving Atlanta.