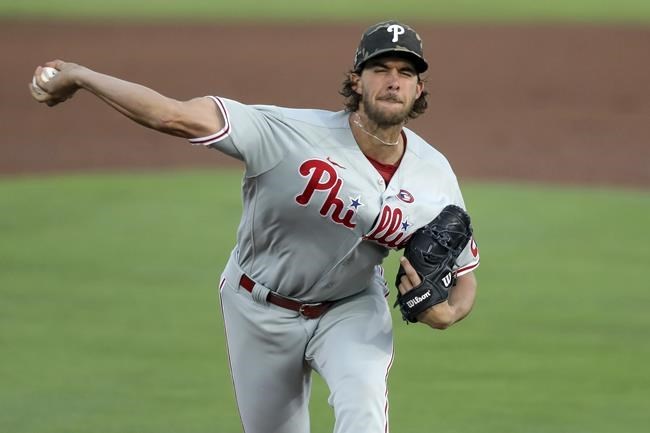 Harper was replaced defensively in right field by Scott Kingery to start the bottom of the fourth. Harper struck out in both of his at-bats.

The Phillies said Harper is day to day.

Guerrero hit his 10th homer, a first-inning solo shot off Aaron Nola (3-3). The drive to right was Guerrero's sixth to the opposite field.

Lourdes Gurriel Jr. had an RBI double and Reese McGuire added a run-scoring single as Toronto took a 3-0 lead in the second.

Andrew Knapp pinch-hit for Phillies catcher J.T. Realmuto in the eighth. There was no immediate announcement about the substitution.

Realmuto left Tuesday's game against Washington after taking a foul ball off his left knee and felt ill with a fever Wednesday night. After not playing Thursday, he was the DH in Friday night's series opener with the Blue Jays.

Phillies: SS Didi Gregorius (right elbow stiffness) was out of the lineup for the third straight game and said he will undergo additional tests that will likely include a second MRI exam on Monday. Gregorius said there is swelling on the outside of the elbow that limits his swinging a bat. “I am worried because I haven’t been on the field,” said Gregorius, who isn’t sure if he can avoid going on the injured list. … RHP Archie Bradley (left oblique strain) allowed one run and two hits over one inning for Triple-A Lehigh Valley.

Blue Jays: CF George Springer (quadriceps) continues taking batting practice and is going through his rehab program but there is no date for when he will return. “It’s always tough to tell when it comes to quads,” manager Charlie Montoyo said.

Phillies RHP Chase Anderson (2-3) and Toronto LHP Robbie Ray (1-1) are the scheduled starters in the series finale on Sunday.