CHICAGO — Edmonton general manager Peter Chiarelli listed three reasons for trading Jordan Eberle to the New York Islanders, but the one that loomed largest had more to do with franchise cornerstones Connor McDavid and Leon Draisaitl.
Jun 22, 2017 6:36 PM By: Canadian Press 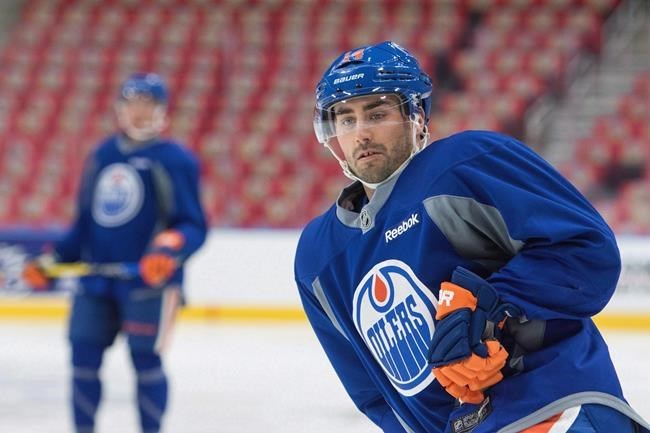 CHICAGO — Edmonton general manager Peter Chiarelli listed three reasons for trading Jordan Eberle to the New York Islanders, but the one that loomed largest had more to do with franchise cornerstones Connor McDavid and Leon Draisaitl.

Getting Eberle's costly deal off the books gives the Oilers room to fend off a "predatory" offer sheet to Draisaitl, a restricted free agent on July 1 coming off a career-best 77-point season. Rival GMs could be looking to strike knowing that the Oilers face not only a pricey new deal for him, but an even bigger one to McDavid, who just won the Hart trophy at age 20.

Chiarelli said he didn't think any offer sheet to Draisaitl was necessarily imminent, "but there's always the chatter and I want to be firm and clear that we have a significant amount of space and will match anything."

McDavid still has one year left on his entry-level contract, but can be signed to an extension (which kicks in for the 2018-19 season) on July 1 — one that could and deservedly should be quite pricey.

"It's the whole picture," Chiarelli continued of the trade, which landed the Oilers 23-year-old Ryan Strome in exchange for Eberle. "I want to be in a position that we can one, pay these players, which we are (going to), and two, fend off any suggested predatory offer sheets — which we're comfortably in that position now."

Offer sheets are incredibly rare in the NHL. The last one came more than four years ago in 2013 when Ryan O'Reilly drew a modest two-year deal from Calgary while he was still with Colorado.

Any offer to someone like Draisaitl would be far larger and potentially prohibitive to Edmonton if the salary cap was a concern.

Eberle still has two years remaining on a six-year deal with an annual cap hit of US$6 million; Strome carries just $2.5 million on the cap for the 2017-18 season before he becomes a restricted free agent.

That saves the Oilers $3.5 million in cap space for the coming year and perhaps a little less after that when Strome signs a new deal. Some of those short-term savings are expected to be used on veteran defenceman Kris Russell, an impending unrestricted free agent whom the Oilers intend to keep despite wobbly underlying numbers.

"If and when we sign Kris, we'll continue to be in that very comfortable position," said Chiarelli, shortly after landing in Chicago for the draft following the NHL awards in Las Vegas, where McDavid collected league MVP along with the Ted Lindsay Award as players' choice for the league's most "outstanding" player.

Cap management and long-term thinking aside, the Oilers are gambling in the short-term on Strome, who proved to be a disappointment over time with the Islanders.

Strome, who turns 24 on July 11, had only 30 points in 69 games last season and 28 in 71 games the year before that. Both marks fell well shy of the 50-point campaign he managed as a sophomore. New York picked the Mississauga native fifth overall in 2011, two picks before Mark Scheifele went to Winnipeg.

Chiarelli said he was intrigued by Strome's six-foot-one, almost 200-pound frame, "terrific" wrist shot, "cerebral" sense for the game and versatility — since he can play both centre and wing. He scouted Strome closely while managing Team North America ahead of last fall's World Cup of Hockey.

Strome found out about the trade while on a flight with his family to Chicago, where brother Matthew Strome is expected to be selected in the upcoming draft.

"Super excited honestly," he said of the trade, repeatedly noting his eagerness to get going with Edmonton. "Other than the emotional aspect of missing some teammates and stuff like that, I couldn't be more excited for the new opportunity. Obviously a lot of great things going on in Edmonton."

Within hours of the trade, Strome had already heard from some of his new teammates and recalled watching the Oilers top young talent during the club's long-awaited playoff berth this past spring. McDavid just happened to be trading SnapChat messages with the other Strome brother, Dylan — his former teammate with the Erie Otters — during the family's trip down to the draft.

Strome said he hoped to regain some "swagger" offensively with the Oilers, perhaps alongside McDavid or Draisaitl.

Edmonton needs for that to happen, because otherwise a team with Stanley Cup aspirations,just downgraded its offence. Though Eberle has trended downward since a 34-goal, 76-point sophomore campaign and had a goal-less playoff, he's still scored at least 20 goals in each of the last five full seasons — nearly doubling Strome's output in the last.

Chiarelli said his recent struggles had "something to do with (the trade), but the reality is that Connor and Leon are going to get big raises and we have to clear some space. Then, you have to choose someone who you're going to move and unfortunately it was Jordan."