The video starts with Morgan Rielly standing at a sink before the Toronto Maple Leafs defenceman proceeds to demonstrate the correct way to wash your hands. Another clip shows teammate Zach Hyman inviting fans to play games against him online.
Mar 24, 2020 3:12 PM By: Canadian Press 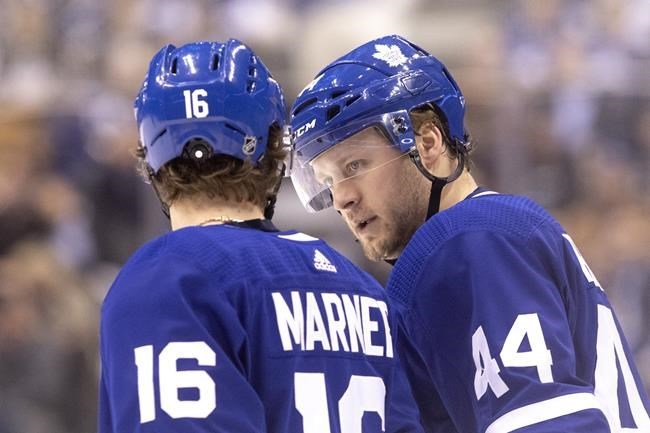 The video starts with Morgan Rielly standing at a sink before the Toronto Maple Leafs defenceman proceeds to demonstrate the correct way to wash your hands.

In an unprecedented era of social distancing, self-isolation and quarantine during the global COVID-19 pandemic that has seen arenas go dark, NHL players and their teams are doing their best to stay connected with fans on social media.

"A lot of what they're trying to do is just do their part," said Joe Gagliese, co-founder and CEO of marketing agency Viral Nation. "People look to them in times like this because they idolize them."

The Leafs posted a video of general manager Kyle Dubas talking about the importance of staying home to help stop the spread of the deadly novel coronavirus outbreak, while Vancouver forward Tyler Motte focused on mental health during this period of uncertainty.

Pettersson, Canucks captain Bo Horvat and defenceman Tyler Myers also combined for a video about staying safe and listening to experts, while the Calgary Flames shared a FaceTime call by winger Matthew Tkachuk where he wished a young fan happy birthday after his party had to be cancelled.

One video from the Edmonton Oilers shows centre Connor McDavid playing with his dog — indoors, of course.

Aziz Rajwani, a lecturer at the University of British Columbia's Sauder School of Business, says there's a social responsibility for high-profile figures — including athletes — in difficult times.

"Because of their status in society, they have a pedestal," he said. "People do worship the ground that they walk on and they will listen to them.

"This is an opportunity for them to actually do a public service announcement or say, 'How can I help?'"

Teams and athletes often have hundreds of thousands or even millions of followers on social media. Many of those subscribers are young and impressionable.

And a lot of young people, at least early in the crisis, weren't taking the public health warnings about the dangers of congregating in large groups seriously.

"Teams should be calling up provinces and saying, 'How can we use our players for their message about following safe practices, washing hands, whatever else it might be,'" Rajwani said. "Unfortunately many of them don't take advantage or understand how much good they can do.

"Some people might say, 'I don't want to be in that fishbowl. I'm not a role model.' I would respond, 'You are a role model, and therefore, act responsibly in a manner that's consistent with being a role model.'"

The Leafs sent out a message to players and staff early in their self-isolation — all NHLers are under the same restrictions until at least March 27 — following the league's suspension of play to see if any wanted to help with some messaging for the general public.

Meanwhile, the Canucks have encouraged players to reach out on social media to fans during the league's pause to both inform and, where appropriate, even entertain.

Some teams are simulating games and sharing the results online, while others are live-tweeting classic post-season battles as they're replayed by television networks scrambling for content.

But while the messaging and contact can help enlighten, Gagliese says other things are also at play.

"These teams are all under this chokehold of, 'My God, I don't want this (pandemic) to last too long,'" he said. "They're looking to their players to say, 'Hey young people, we need you to do this not only for your safety, but the global economy and hockey and everything you know and love.'

"Part of it is philanthropic — just doing the right thing. And part of it is basically in a nice way saying to the community, 'Hey guys, let's band together because the quicker we get rid of this crap, the faster we get back on the ice.'"

Teams and players also have to walk a fine line in what they post to their social media accounts. Millionaires sharing videos detailing isolation from expensive condos or sprawling mansions isn't anywhere close to what many families are experiencing with layoffs and uncertainty dealing a major blow to the economy.

Rajwani, however, said going about things the right way during an unsettled period can go a long way.

"If players always just do the right thing, that is their brand, because that's who they really are."

This report by The Canadian Press was first published March 24, 2020.